How to save billions of litres of water 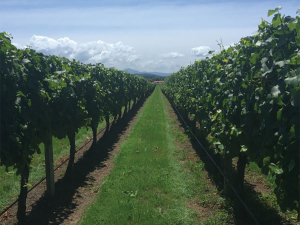 One of the Sauvignon Blanc vineyards in the deficit trial, shows the difference in canopy and undervine weed growth. Deficit irrigation vines are on the left, control vines on the right.

The latest summer has once again highlighted the fragility of relying on river sources for irrigation in Marlborough.

In late January the Southern Valleys irrigation Scheme was shut off, and both Class A and B consents on the Waihopai and Wairau Rivers were also closed off. It left grape growers relying on the water for irrigation high and dry, unless they had other forms of water storage to use. Some had to resort to trucking water in to keep their vines alive.

With climate change, these periods of intense dry are only going to occur more frequently. Which means growers need to be looking for ways of conserving water, without impacting on the resulting wines.

So, what if there was a way to cut down the reliance on irrigation, that would not only save you hundreds of thousands of litres of water per hectare a year, but would also lead to earlier ripening, without impacting on yields?

Thoughtful Viticulture’s Mark Krasnow has been studying the effects of deficit irrigation in vineyards in Marlborough, Central Otago and Hawke’s Bay. His findings could change the face of irrigation in the years to come.

The vast majority of grape growers measure their soil moisture levels via a soil probe, as the move away from calendar-based irrigation becomes the norm. But for Krasnow, he wanted to determine exactly how much water the vines needed, rather than base an irrigation programme on soil moisture.

“What I am talking about is measuring vine water potential” he told the NZSVO Sauvignon Workshop.

“Water potential is a little bit like blood pressure. It basically is a measure of how hard the leaves are having to pull up water to extract that water from the soil. As the soil gets drier, the vine has to work harder to extract that moisture and we can directly measure that using a pressure chamber.”

There is some strong reasoning behind measuring the vine rather than the soil, Krasnow said.

“If a vine gets too dry and we have too much tension in the xylem, you can actually have that water column that connects the vine to the soil, break. When that happens the water movement through that particular pipe stops, until the pipe can be refilled.

“If that pipe doesn’t refill and if the vine losses a critical number of pipes you start to see leaves drop and eventually you see vines die.”

With vineyards in the three major regions, monitoring of Sauvignon Blanc, Pinot Noir, Chardonnay and Merlot began. Each vineyard block was divided into two irrigation zones; deficit and control.

Both zones were watered “reasonably well during the early season, because we need to build that canopy, build the photosynthetic area and we want to make sure the yields are safe. We don’t want to negatively impact berry size.”

For the reds, once the fruit was set and for whites once veraison hit, the irrigation on the deficit zone, was cut back to only being used if the vines showed they needed it.

In the 2018 season, three of the six deficit zones, (two Pinot blocks and one Sauvignon Blanc) required no irrigation after veraison, because the vines never fell below that threshold.

“Because we are measuring on need, we found that they only needed about half of the water they would normally have received. That is a lot of litres per hectare and if you spread that over the entire area where we are growing Sauvignon Blanc in Marlborough, the savings are quite staggering.”

As for the impact of deficit irrigation on Sauvignon Blanc fruit – Krasnow says the results were heartening and surprising.

“I expected to see a little more ripeness in the vines that got irrigated less, but what we saw in every single vineyard, every single sampling data, was the deficit fruit was riper than the control.”

That he says is simply because only irrigating when the vine required it meant the vine was putting its energy (sugar) into the fruit, rather than growing laterals.

When looking at rot severity, one of the deficit zones in one vineyard had more botrytis than the control –due to being riper when the rain arrived. “Riper fruit is far more susceptible to botrytis.”

But the other vineyards saw no differences in rot severity. Plus there was very little difference in yields in any of the vineyards.

The differences instead were the savings on water.

Now that does add up for the future.

2019 is the second year in a three-year research trial, funded by New Zealand Winegrowers and the Bragato Trust.