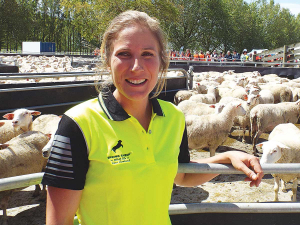 300 plus rurals turned up at the fifth annual Spring Sheep Co open day at Matangi near Hamilton.

The high turnout was little surprise with New Zealand’s bovine dairy industry under the pump.

Pushing the message ‘Discover New Zealand’s Gentlest Milk’, building on advantages for those struggling to digest cow milk, the presenters talked the audience through Spring Sheep’s journey so far. That journey centred around bringing together aspects like the NZ production environment, building a scaleable supply chain, understanding the needs of consumers and new product development.

With five years under its belt, the company suggests they are now able to demonstrate the concept really works and they are moving to a position to bring more farmer suppliers on board.

At this stage Spring Sheep operates three farms, one located near Taupo and two near Hamilton. A new supplier at Karaka, South Auckland has just been welcomed and will milk 600 ewes next season.

“Milking sheep has a much lower environmental footprint.”

The presentation went on to note that a typical property for conversion into sheep milking fell into the 50-70ha size, probably had a mothballed milking parlour and may have fallen into maize production because there is no succession planning.

This looked to be the case at the Tauwhere Road Farm that ran to 55ha, had a disused milking shed and had transformed to carry 900 head of sheep in 150 days between April and August 2018.

“We just needed to add a few rails in the milking shed and go from four to two cups, sort out some fencing and water supply out on the farm and we were up and running.”

Today with the help of two staff, ewes are milked through a 24-a-side shed, taking around three hours for the morning and 2.5 hours for the afternoon sessions.

Felicity, an ex-dairy farm worker and shepherdess says sheep are “just so friendly, come into and leave the shed easily, so I love seeing how happy they are”.

Much of the growing interest in the concept centres around production levels, that in turn drive revenues from milk, wool and cull animals.

Traditionally, NZ sheep struggled to produce even 200 litres per annum, but the introduction of European genetics in 2017 has seen a steady rise in output that is likely to reach 300 litres during the current season. With typical supply contracts offering around $3 per litre, the company suggests that at 300 litres production, returns are slightly above dairy and if they reach 400 litres, as predicted, will be well ahead.

Current production largely goes for drying at the Waikato Innovation Park at Hamilton, with a second plant being developed by Melody Dairy coming on stream in 2020.

The dried product is incorporated into a range of products including milk replacements, ice cream, yoghurts and cheeses marketed on their nutritional benefits rather than a luxury item. Current markets include Taiwan, China, Vietnam, Singapore, Malaysia, Australia and NZ.

Currently human clinical trials are being conducted to prove sheep milk products are a real alternative to those struggling with the digestion of cow milk. Sheep milk is lower in alpha-S1 casein and naturally an A2-type product, free from the A1 beta casein proteins. It is also high in short to medium chain fatty acids making it easy to digest. The product is also 60% higher in protein than cow or goat milk, with higher levels of A, B, C and E group vitamins and good levels of the minerals, palcium, phosphorous and magnesium.

Spring Sheep Milk is jointly owned by Pamu and SLC. Pamu, formerly Landcorp, is owned by the NZ Government and is currently the country’s largest farmer, with 1.6 million livestock units, operating in the areas of milk production, beef, lamb, venison and wool.

SLC is a marketing company that specialises in taking high-end NZ products to the global marketplace.