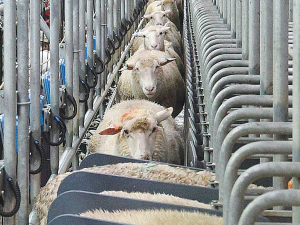 There is quite a bit of interest in setting up sheep milk farms in Canterbury.

But Guy Trafford continues to see a rising potential for sheep dairy, is encouraging “the younger generation” into the industry, and continues to sell bottled sheep milk from other producers through his retail outlet.

Trafford and his wife Sue, then both Lincoln University lecturers, set up their dairy sheep farm at Charing Cross after the Canterbury earthquakes. They built up to full production by 2017 with a range of products including bottled milk and cheeses, and in 2019 took up retail space in the popular Riverside Market in central Christchurch.

His wares now include milk from Matt and Tracey Jones, who have recently begun producing bottled sheep milk as part of an ambitious expansion plan for their Kirwee-based operation.

Matt Jones says their Jones Family Farm brand bottled sheep milk went on sale just before Christmas. It is available through a number of outlets (mainly Foodstuffs) around Christchurch and as far south as Mosgiel.

“Not every one of their shops have picked it up but it’s gaining momentum,” he says.

Jones couldn’t give sales numbers but said people were beginning to ask for sheep milk specifically. He described it as tasting a bit like ice cream because it is creamier and sweeter than normal milk and very attractive to a child’s palate.

“The biggest issue with it is, people still have this fear or phobia of sheep milk – until they try it. That’s why we went out with a 450ml bottle retailing at four bucks. So it’s not a big cost to try it.”

Jones says they originally looked at using glass bottles but have gone with recyclable plastic because they proved more economical and, he believes, more environmentally friendly than the resources and logistics needed to make and reuse glass.

Their next big developments include a UHT plant and a 440kg/hour spray dryer to produce powdered milk, which he hopes will be operational for 2023.

The Joneses got into milking sheep in 2019 after investigating the health benefits of sheep milk, and up to now have been selling cheese and a range of sheep milk-based cosmetics.

Their own milking flock numbers about 600 but they also take and process milk from five other South Island sheep milkers, from as far afield as Ashburton and Oxford. Those suppliers currently make up about 75% of the total bottled milk volume but Jones says that will grow to about 85% in the coming season with one more supplier lined up to join, and many more wanting to come on board.

Trafford said they decided to concentrate on the shop after the Covid lockdown.

“We’ve still got the sheep here [on the farm], and we can still make cheese here, but we’ve backed off from the milk production side of it.”

However, he admits that they never had a lot of interest from the general public for sheep milk, even when they tried chocolate flavouring with their own brand.

He says that’s a shame because sheep milk is a great product.

“Christchurch is quite a conservative population when it comes to new products,” says Trafford.

“But it has picked up. We sell a lot more cheese and things like that now than we used to.

“But not the yogurts and not the fresh milk.”

However, he sees “quite a bit of interest” in setting up new dairy sheep farms in Canterbury, with at least one other producers’ group getting established in addition to the farms now supplying the Jones operation.

“I suspect once they see some bricks and mortar go in that will grow, because there’s certainly plenty of interest from the production end of it.”

He is suggesting the groups get together and go to MBIE in a joint funding bid because there’s been “no government money at all” going into South Island sheep dairying.

“It’s all gone into the North Island hub, which is a bit of a shame because sheep do really well in the South Island.”

Sheep milk farmer Matt Jones has revealed that he is talking with a number of dairy goat farmers with a view to producing a range of goat milk products by the 2023 season.

Making his Kirwee plant available for goat milk would meet a need that South Island goat milkers have been talking about for years.

While there are some niche goat cheese producers, many say compliance costs for public sale are prohibitive and there is not yet a South Island processor of the scale of Waikato’s Dairy Goat Co-operative.

Jones says the dryer he is planning to install will have spare capacity and they could potentially make a similar range of goat milk products as they do with sheep milk.

“There’s nobody in the South Island so we’re working with a number of suppliers and seeing what I can do to help them develop an outlet.”