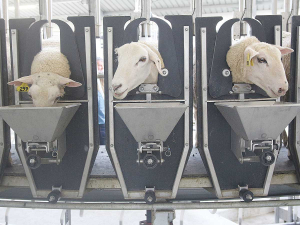 Maui Milk is offering farmers a payout of $17/kgMS for sheep milk.

The company has also hinted at building its own sheep milk processing plant.

It has added four independent suppliers from Waikato. However, it needs more milk to supply sheep milk powder to customers who manufacture infant formula.

Last month, the company hosted open days for Waikato farmers who may be interested in converting to sheep milking. Maui Milk is offering farmers a payout of $17/kgMS.

“We are aiming to have 60 farms milking in five years…we want to do more than that, but we want to be cautious in our growth at the start.

“So, farmers who aren’t ready to convert now, we are interested in those looking to convert in subsequent years.”

Davey says the international market is huge and growing, but all of the big players are looking for a point of difference.

“A2 and the goat product have shown the way but now we have something that ticks every box for the demanding high-end consumer.

“In its natural form, sheep milk contains about 50% more nutrient than cow or goat milk. Like goat milk, it is easy to digest, but it has better flavour. It’s free-range and pasture fed,” Davey says.

“All lambs are reared and many are reared on their mothers. Consumers love this concept, and it has a lot of appeal to farmers too.”

“We also know there are a lot of farm owners nearing retirement age. Some want to retain an interest in the farm, but recognise it’s time for someone else to take over the day to day management.” he says. “We’re happy to match those with the makings of a good team”.

Answering questions from farmers at the open day, Maui Milk chairman Paul McGilvary said that the company is backed by a group of Chinese investors “who absolutely believe in sheep milk”.

He says there’s no secret about the make-up of Maui Milk: 60% owned by Super Organic Dairy Company and 40% by the Waituhi Kuratau Trust.

Super Organic, made up of Chinese investors and NZ company Oravida, also owns 70% of Southern Cross Breeding Company, which breeds sheep for milking in NZ. The breeding company is 30% owned by Peter Gatley and Jake Chardon.

McGilvary says the board will, over time, look at processing options and having their own processing plant isn’t being ruled out.

In 2018, the Brownes leased some Southern Cross Dairy rams from Maui Sheep Milk to set up their dairy sheep operation. They also signed to supply Maui Milk.

Browne says he has received excellent support from the company to set up his sheep milking business.

• Maui Milk has over 5,000 dairy sheep spread across two farms on the western shores of Lake Taupo.