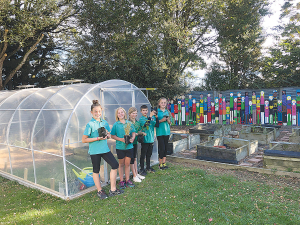 Students from Heddon Bush school in front of their new tunnel house.

With the help of local Rabobank staff, the five-metre long tunnel houses were installed at the schools during March and early April.

Primary schools across Southland were asked to apply to receive a tunnel house in October last year. The selected schools were Heddon Bush, Takitimu, Balfour, Riverton, Heriot, Mossburn, Waikaka and Lochiel. Those schools will also receive a composting bin, compost and seedlings.

The idea for the initiative came from Rabobank's Southland agribusiness manager Michael McHutchon and was submitted by the Rabobank Southland team as part of a staff competition linked to the launch of the bank's Rabo Community Fund - set up to support rural and regional communities across New Zealand and Australia.

The tunnel house initiative was selected as the competition winner in October last year and the Southland team awarded the necessary funding to execute the project.

"Food production is such a significant part of Southland and New Zealand's economy and we wanted to look at ways we could help schools to increase interest and understanding of this topic," she said.

"Each of the schools has different ideas on how they will use the tunnel houses, with some looking at growing produce to donate to students and their families and others looking to provide further learning opportunities by selling surplus produce through a school market day."

Heddon Bush school teacher Sarah Guise said students at the school were rapt their school was selected to receive a new tunnel house.

"As an Enviroschool, we have a strong environmental focus, and, as part of this, a small group of our students are tasked with developing the school's sustainability vision," she said.

"When the students developed this vision early last year, a tunnel house was one of the items on their wish list, so the Rabobank opportunity came at a perfect tim for us.

"We were quick to register our interest and the kids were absolutely stoked when I passed on the news that our school was one of the lucky winners."

Guise said the students were really excited when the tunnel house was delivered by Rabobank staff in early April and they'd already come up with a number of great ides for how it could be utilised. "The school has a piece of QE2 covenant land close by that's been used over the years to plant natives and we'll now use the tunnel house for planting out or growing native seedlings for use in riparian plantings," she said.

Ministry for Primary Industries (MPI) inspectors are on the ground in Otago and Southland to support animal welfare as farmers enter the winter grazing season.