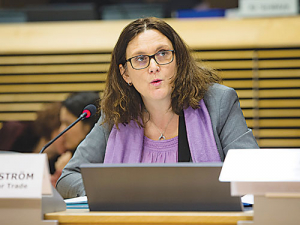 Dairy products will be high on the agenda when New Zealand and the European Union begin formal negotiations next month on a free trade agreement (FTA).

EU Trade Commissioner Cecilia Malmström will attend a formal launch of negotiations in NZ, understood to be starting with a meeting with Trade Minister David Parker about June 20 to set the agenda and define the process.

Malmstrom and EU negotiators will meet officials from the Ministry of Foreign Affairs and Trade (MFAT) during her two-day stay.

In July MFAT trade negotiators will go to Brussels to start the detailed formal negotiations.

Dairy News understands that a high priority for the NZ negotiators will be improved access and lower tariffs for our dairy exports to the EU.

The chief executive of the Dairy Companies Association (DCANZ), Kimberly Crewther, says the talks will be a milestone that will “get us around the table to begin the negotiations”.

“DCANZ welcomes the EU’s decision to move forward with negotiating a free trade deal with NZ. We thank the Government and officials for their hard work and we hope negotiations commence in a timely, comprehensive and ambitious way.”

Crewther says NZ’s exports to the EU are highly restricted by market access barriers.  Even the in-quota tariff on butter is 700 euros per tonne, meaning that in 2017 only 9000 of the two million tonnes of butter consumed in the EU was imported.

“Maintaining this level of protection does not make sense when the EU is a competitive dairy exporter in its own right, and there is significant two-way investment between the NZ and  EU dairy industries.

“DCANZ is placing priority on NZ and the EU reaching a high-quality trade agreement that includes the elimination of all existing tariff barriers.” Eliminating tariffs will allow European customers to choose NZ products and ensure that our farmers and dairy processors get the fair value of those goods.”

He shares her view that the EU and NZ are already closely aligned in values and an open, global outlook. This opens the way for a free trade deal with a massive economy that will boost NZ jobs and incomes.

“These negotiations offer significant economic gains for NZ and the EU. They are an example of like-minded countries working together at a time when the world faces a rising tide of protectionism.

“The EU is our third largest trading partner, with two-way trade worth more than $20 billion. Even excluding the UK, our trade with the EU is worth about $16 billion annually,” he says.

Parker says at the start of negotiations the Government will outline our negotiating priorities.

The FTA is expected to take about two years to finalise.