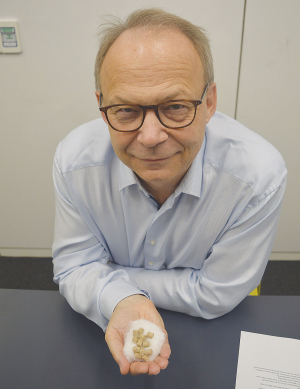 Farmers are urging the Government to help register a novel methane inhibitor for cow rumens.

Trials have shown that the 3-nitrooxypropanol (3-NOP) feed additive can reduce methane production in cows by 30%.

But DSM, the global animal health company seeking to market the product, says it is facing delays in getting the product registered in New Zealand.

Hoggard says he’s surprised by the “glaring gap” in regulations that’s preventing the registration of 3-NOP. He says there’s nothing to stop DSM selling the product in NZ right now but the company wants it registered.

“Farmers also want to know that the product will give them results in reducing greenhouse gas emissions.”

Hoggard says the issue has been raised with the Prime Minister and some ministers.

“We want the Government to get on and create this category: feed supplements for environmental benefits.”

Any sale of an agricultural compound or veterinary medicine (ACVM) in NZ must be authorised under the ACVM Act 1997.

But DSM claims it has been unable to register the product in NZ because MPI’s register doesn’t have a category for such a product.

Goppelsroeder told Dairy News that DSM has hit a roadblock on how to approve the product for use in NZ.

“The regulatory framework in NZ doesn’t have a category for a product whose main benefit is environmental performance. This is surprising given that the country is ready and very sensitive to climate change.”

DSM has already filed an application for approval of the feed additive in Europe. Registration of a product there takes on average 12-18 months.

Goppelsroeder says a green light from European regulators could come before the end of next year. “If they see this product as a special bullet, approval could come from Europe even faster.”

Goppelsroeder hopes MPI will create a new category and approve 3-NOP. “We will be watching like hawks over the next few weeks.”

MPI director of assurance Allan Kinsella rejected assertions that there is no category in MPI’s regulatory framework for 3-NOP.

“3-NOP can currently be registered under the Agricultural Compounds and Veterinary Medicines (ACVM) Act as a ‘feed additive’, and this was communicated to DSM when MPI staff met with them,” he told Dairy News.

“Consequently there is no barrier to DSM marketing 3-NOP as an environmental inhibitor in NZ in relation to MPI-administered legislation.  However, it may be subject to other legislation such as the Hazardous Substances and New Organisms Act administered by the Environmental Protection Authority.

“Trade name product registration under the ACVM Act can afford up to 10 years of data protection, however as ‘environmental inhibitors’ are not currently within scope of the Act they are not eligible for data protection.”

MPI is considering how to effectively and efficiently manage products like 3-NOP as ‘environmental inhibitors’.  Issues include their level of risk in respect of trade and residues.

Kinsella says there is no “MPI roadblock” to registering 3-NOP and that DSM may decide whether or not it enters the NZ market now. He says MPI will talk to industry and other key stakeholders soon in respect of its work on inhibitors.

MPI says it welcomes the effective development and use of emerging technologies to reduce agricultural emissions.

“We also recognise the need to ensure products, such as environmental inhibitors, can be used safely and effectively.”

Dairy Farmers are playing their part in tackling climate change alongside all other sectors.