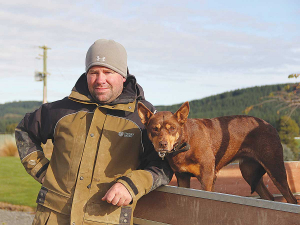 While their milking cows only move one kilometre to a neighbouring property, they still manage their NAIT obligations diligently.

The Blackmores milk 650 cows on 225ha effective milking platform, including 20ha of winter crop. The run-off is 3km away: a 72ha block for cutting silage and beef fattening. The farm and block are registered under one NAIT number.

Pete Blackmore says they usually dry-off at the end of May, weather and feed permitting.

The herd grazes at the property next door. Young stock are sent to graziers at Wyndham and Ranfurly.

To record grazing movements, the Blackmores use LIC MINDA.

“We arrange our cows into four date-scanned calving mobs and walk them down the road once they are ready to go on crop.

“The selected group is transferred as a NAIT task within the MINDA Pro app. It automatically registers the grazing movements into the NAIT system.
“We use the same system to transfer in-calf heifers when they return pre-calving.”

Pete says they update the NAIT location of each group concurrently with the physical movement of returning them to the platform.

“Because the MINDA software allows the stock to remain within the herd, we can transfer the stock back as whole groups or individual animals, if there is an early calf or death.

“This allows us to carry out NAIT requirements and update herd records ourselves.”

An animal status declaration (ASD) is a key document when moving stock.

Pete says the ASD can be generated automatically. Sometimes they use a paper ASD.

“I wouldn’t know of any transporters willing to move stock without a completed ASD. It acts as a traceable tool for early detection of threats such as Mycoplasma bovis or TB.”

The Blackmores have a good relationship with their graziers. Pete says they are all NAIT compliant and motivated progressive farmers.

“This makes recording of stock movements easy.”
OSPRI is also supportive. It can sort records over the phone and talk through transfers.

“It isn’t time consuming and puts you in control of your online stock locations.”

“Fortunately, we’ve not had an issue with TB but are aware of the significant risk it poses to the wider industry,” says Pete Blackmore.

“AsureQuality did testing and scanned every NAIT tag, which was a great way to capture any untagged animals.

“We drafted them out and replaced them. It is straightforward to assign NAIT tags to these animals.”