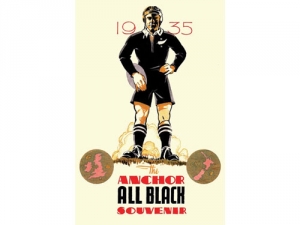 More details on the Anchor milk-All Blacks partnership will be released later this month.

On July 31, 1935 the All Blacks and Anchor milk products embarked on the 17,000 tonne ship Rangitiki and set sail side-by-side for England – the beginning of Anchor’s partnership with the All Black’s tour of Britain, Ireland and Canada.

Fonterra Brands NZ director of marketing Clare Morgan says many of those 1935 players came from dairy farms, as many now still do, and it’s the shared values of the two that fuelled the original partnership and remains true today.

“NZ was built on the hard work and broad shoulders of its farmers. They tamed the land and made it productive.

“True grit and determination have always been the making of our dairy industry and our other world famous exports like the All Blacks.

“In partnering with the formidable All Blacks team… they showed what being NZ-made was all about.”

Morgan says the DNA of Fonterra dairy farmers and their local communities have always contributed to the All Blacks’ success.

“The work ethic and hands-on attitude of dairy farmers lends itself to performing well at the highest level.”

Fonterra is throwing its weight behind a donation appeal that aims to feed 15,000 New Zealanders this Christmas.

Anchor Light Proof milk bottles will soon appear on farms but you won’t find them in a fridge.