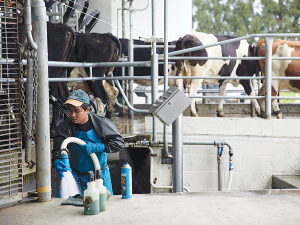 The dairy sector is struggling to obtain visas for migrant workers and is blaming Government for the impasse.

In June the Government allowed 200 migrant dairy workers - a mix of dairy assistants, herd managers and assistant managers - throught the border to help with the workforce issues facing the sector.

Applications are currently open but there is a long application and processing time, and Immigration NZ's new requirement will delay some of these applications further.

Since the applications have been made, Immigration NZ has advised that the salary of $79,500 for herd managers can only be applied to a maximum 40-hour work week. If there is an expectation of more weekly hours, this salary must be increased. If farmers are happy to proceed with the 40-hour week, the application can proceed.

Dairy News understands that some applications have since been declined.

Federated Farmers Dairy chairman Chris Lewis says paying someone $80,000 and having no leeway to have them work extra hours, especially during calving and mating seasons, doesn't make economic sense.

"The nature of farm work is that there will be extra hours during some weeks," he told Dairy News.

Lewis says the sector wanted 500 extra workers from overseas and the Government agreed to allow only 200.

"Now we have MIQ spaces lying idle and yet we can't get much-needed overseas workers through."

Lewis says the agreement with the Government was that migrant workers would be paid the median wage of $25.50/hour.

He says the Government blindsided them with the 40-hour week requirement.

"Desperate farmers are happy to pay above the median wage for workers, but the strict requirements are making the applications unworkable. Farmers need people to come and help with the essential jobs on farm and they need them now."

DairyNZ chief executive Tim Mackle says the present Covid outbreak in NZ has seen plans to bring in overseas workers to help in the dairy industry put on hold, creating uncertainty about the future.

Mackle says not only are they not able to get in workers from overseas, they are losing some of the existing workers to countries such as Australia and Canada who are offering better deals for migrant workers.

"For example, Australia has upped the ante by offering an 'ag visa' that offers a much shorter pathway through to residency, which is much more attractive to migrant workers and their families," he says.

Mackle says while the dairy industry has a class exemption to bring in 200 workers, it's the details around this that are a worry. He says the process needs to be improved, simplified and made more practcal if it's to work effectively.

He says a major unexpected roadblock that has been flagged is a requirement that the pay rates for overseas workers coming in as a manager is significantly higher than the NZ market rates.

"Then there is a provision that these people can only work 40 hours a week, which is not practical on dairy farms at certain times of the year, so we are trying to sort this out with the authorities," he says.

Securing MIQ spots remain the biggest hurdle to getting overseas workers for the dairy sector.