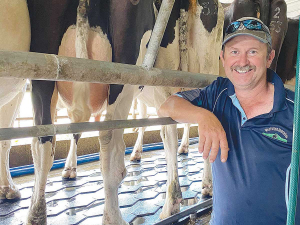 On his farm's Te Maire farm, which traces its history back 105 years, those green paddocks may also contain bright yellow sunflowers, peas winding themselves up stems of sorghum, or faba beans drilled directly into sandy paddocks, and buckwheat added to release phosphate tied up in the soil.

"I'm a big fan of the idea that different plants can do different things to your soil without havin gto get into a tractor and burn diesel," says David.

He has been "dipping his toes" in regenerative farming practices over the last two seasons on the family's 220 hectare farm and 40 hectare run-off. While the farm is not fully regenerative, he is now an advocate of what regenerative practices can do for farming soils.

"We experimented last year with a paddock that we call the duck pond, for obvious reasons. We had tried everything with it. I had done a lot of reading on sunflowers and millet and their ability to break up tight soil, so we planted that mix in the paddock and the results were amazing."

The sunflowers and millet broke up the soil and it is now one of the best paddocks on their farm. The crop they cut from the paddock was mixed with molasses and a bit of baleage for their Holstein Friesian herd, which thrived on the high protein mix.

"The product that we took off to feed the cows was incredible. If you were growing that you would never grow maize to feed your cows again," says David.

David and Karen average 400 kgMS per cow from their Autumn calving herd and David says it was the hot dry Northland summers they have experienced in recent years that made them realise the yield thye were getting from their maize was too low and it was proving too expensive.

"I started doing a lot of reading and the regenerative approach seemed to make a lot of sense."

Now they make up to 1,000 bakes of baleage both from traditional pasture and from paddocks they are regenerating using their newfound crops.

This season they added peas to their paddocks to increase nitrogen in the ground and sorghum because the peas yield better with something to climb. Buckwheat was added to release acids into the soil and free up phosphate to also help with growing better crops.

"It's not a fully regenerative system because the cows aren't feeding directly off it. We cut the crop then let the paddock go back to grass once the other plants have done their job to restore and rejuvenate the soils."

David says the resulting hay and baleage yield a high protein crop however which his cows absolutely love.

"Protein is very expensive to bring in. In the past we have brought DDG meal, but we've found the sunflowers can replace and we're hoping by adding the faba beans and the peas into the hay, we'll eventually be free of having to bring any protein in the farm gate," says David.

David is the fourth generation of his family to run the farm with its pedigree Hostein Friesian her which can trace most of its genetics back to Pukeroro.

In the days well before AI, his grandfather Colwyn used to go to the Pukeroro sale in his Bedford every year and buy a cow and bull and bring them home. That was where the herd started. When AI was introduced the family continued to use Pukeroro bulls.

He describes them as cows that "know how to milk" and over the generations he and wife Karen have managed to breed out their tendency to kick in the shed.

The couple are milking 200 cows this season, slightly lower than their normal 225. David says they ave been fully autumn calving since 1990, when they realised the Northland weather didn't work for their operation.

They dry off on December 24 and the cows are out for about eight weeks.