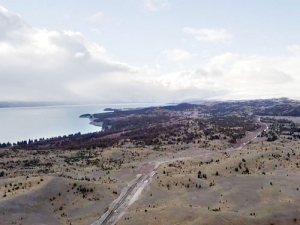 The main irrigation pipeline for Simons Pass Station running alongside Lake Pukaki from the Tekapo Canal.

A controversial dairy conversion in the Mackenzie Country is now allowed to irrigate, even as Environment Canterbury warns that such intensive farming in the area would not now get approval.

Consents from ECan and the Mackenzie District Council are now in place for Simons Pass Station to begin irrigating its land, which straddles SH8 just south of Lake Pukaki.

The consents relate to an area in the north of the station (west side of the highway) previously irrigated by a border dyke system, and to two pivots in the south, close to the dairy sheds where the farm’s 840 cows are now being milked in Simons Pass’s first dairying season.

Ecan’s Nadeine Dommisse, who chairs the Mackenzie Basin Alignment Programme – the group of five government agencies with statutory powers over land use and water quality in the Mackenzie – said this type of intensive farming land use would not now get consent in that location because the rules had changed.

“The rules in the Mackenzie Basin are now are much stricter, particularly since 2015, and are beginning to bite,” said Dommisse. “In fact, two new consent applications for more intensive farming have been declined since 2016 due to concerns over landscape values and water quality.”

The 9700ha station, owned by Dunedin accountant Murray Valentine, is still primarily a beef and sheep farm, with about 1300 beef cattle and calves, 7000 sheep and 840 dairy cows. Conversion to an irrigated dairy farm has been a long process for Valentine, culminating in an Environment Court appeal decision in 2016.

The raft of consents from various bodies include the right to take irrigation water by pipeline from the Tekapo Canal, to build dairy sheds and other farm infrastructure and to farm up to 15,000 cows.

Dommisse said the 99 conditions imposed in that decision, and agreed to by the then appellants, were “probably the most onerous sets of conditions for a farm of this type anywhere in New Zealand”.

One condition was that the station is required to spend at least $100,000 a year on restoring indigenous species in a 2500ha designated dryland recovery area.

Dommisse said Simons Pass had met all conditions bar one, which related to finalising a baseline survey to protect the DRA. However, ECan was confident there was no risk of irrigation reaching that area and no grounds to pursue enforcement action.

“We will be focusing on them completing the baseline survey by the end of the summer,” she said.

“We are watching compliance very closely. Additionally, the station is itself precision farming and measuring and monitoring to a high level.”

Meanwhile, Greenpeace says it is “furious” at the decision to let the farm turn on its irrigators before the baseline survey is complete.

“What’s the point in having rules in place to protect wildlife and rivers when big dairy is allowed to just break them like this?”

Toop said the decision is a symptom of the lack of democracy in the region and a failure of central government to set strong legislation to rein in the dairy industry.

Dommisse said it has brought more environmental oversight through shared information over consent applications and compliance, mapping, pest control and biodiversity programmes that encourage indigenous wildlife. She said the five agencies had been operating under their statutory powers all along but were not always working together as they are today.