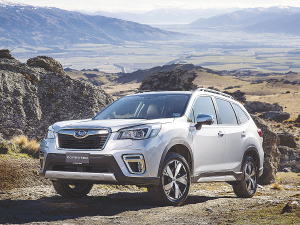 Like all Subaru models, its all-wheel drive and 220mm ground clearance give the Forester lots of traction on slippery farm tracks and make for optimal driving stability on the roads to town.

The family friendly SUV won five awards last year and earlier in 2019, many for the technology that keeps drivers and passengers safe.

Milne says the Forester is the perfect vehicle for her and her colleagues. “It gives me confidence that they have the Forester’s safety and technology at their fingertips as they drive New Zealand’s highways and rural roads. It gives me peace of mind to know they are in the best car for their roles.”

Regularly travelling from her Lake Brunner farm over Arthurs Pass to fly from Christchurch airport, Milne applauds having “all sorts of technology, like the improved X-Mode, working for me if the roads are slippery, snowy, or icy”.

The new Forester has better rear seat access and room for three slim-line child car seats across the back.

Federated Farmers will be at site PA1C at Fieldays.