Winds of change blow at Hyundai 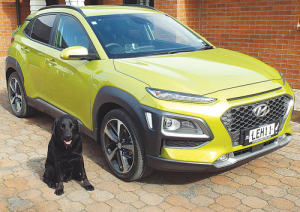 It doesn't seem too long since Hyundai was the new kid on the block, but the last decade has seen it emerge as a key player.

And it leans to agriculture, from its lofty position at the centre of National Fieldays and its sponsorship of TVNZ’s Country Calendar.

Already producing respectable SUVs, e.g. the Tuscon and the Sante Fe, it now has a smaller offering -- the Hyundai Kona, apparently named after a southwest wind that blows in Hawaii. This will give SUV lovers a thrill, given its up-to-date looks and high levels of specification at a modest price.

The Kona comes either with a four-cylinder, 2L petrol engine delivering 110kW/180Nm, or a 1.6L turbo diesel offering 130kW/265Nm; both variants can be specified in standard or higher Elite trim packages. The key differences between the two engines centre on the drive-line: petrol gets 2WD and a six-speed auto, while the 1.6TL is 4WD and delivered with a 7-speed dual clutch set-up.

Living with the 2.0L petrol model for a week, your reviewer motored urban style around Hamilton and made a 650km one-day return trip to Dargaville for a look at the Northland ag field days.

On the open road, the vehicle moved along serenely at the legal limit, burning about 8.5L/100km with a crew of two -- both 1.8m tall -- who agreed the seating was adequate and comfortable, but after 325km “you knew you’d driven it”.

Off SH1, heading across to the northwest coast, the vehicle was largely neutral, but its shorter wheelbase made for a slightly choppy ride and the occupants both commented on a slight roll on the corners.

On some longer inclines the 110kW motor seemed to be running out of puff; judicious use of the paddle shifters kept up momentum but clearly many small four-cylinder motors struggle on these climbs.

Equipment levels in the Elite set the bar for vehicles in this class: leather trimmed seats, a heads-up display system for speed, wireless phone charging in the centre console, climate air conditioning and bigger wheel equipment than the standard offering.

In the cab a 7-inch full colour touch screen takes centre stage and controls audio, telecoms and vehicle functions. Apple Play or Android Auto connect to the outside world, and the vehicle connects to the owner’s smartphone to get guidance functions.

Hyundai’s own Auto App delivers diagnostic and performance data, the car’s location when parked, service reminders and, of course, the nearest Hyundai dealer.

On the outside the car is easy on the eye, with quirky detailing giving a sense of fun; and although it’s small, the Kona projects a certain presence, aided by its daytime running lights.

Following the meteoric rise in the SUV market over the last decade, Korean manufacturer Hyundai has launched a small SUV.

Genesis points to the future

The Australian motoring press, known to take themselves a bit seriously, have been quite dismissive of Hyundai’s large, rear wheel drive, six cylinder sedan, the Genesis.

Leave the anorak at home

DIESEL CARS were long ago the preserve of anorak wearers obsessed with fuel economy statistics that they neatly recorded in log books.