Genesis points to the future 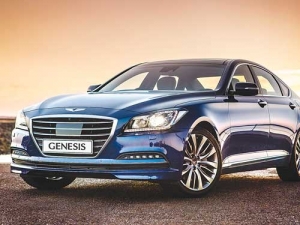 The Australian motoring press, known to take themselves a bit seriously, have been quite dismissive of Hyundai’s large, rear wheel drive, six cylinder sedan, the Genesis.

They practically invented that segment, they said, and the Korean upstarts were dreamin’ if they thought they could match the mighty Falcodores. To be fair, Australia makes a damn good large sedan these days, but the Bruces have never managed to screw one together as tightly as the Hyundai Genesis.

An ambitious project for Hyundai, and by their own admission, a brand build that “demonstrates where the brand is going”, the Genesis is up there with Lexus in refinement and build quality. The Dairy News Ford Falcon XR6 is a smooth enough car, but the Genesis is on another level.

It is big, at 5m long, and heavy at just over two tonnes, but the 3.8L, direct injection V6 copes easily, its power and torque of 232kW and 397Nm pushing the car to 100km/h in 6.5 seconds, the eight speed automatic quietly swapping cogs in the background beneath all the sound proofing.

Noise suppression is impressive, an area Hyundai has put a lot of effort into. Double glazing helps, but the engineers spent many hours tuning the suspension on Australian roads to ensure the ride was smooth and quiet, aware that noise is a big part of people’s perception of ride quality.

The comfort and luxury on the inside also impresses, with only the odd hard plastic surface to remind you what you’re driving. Standard equipment levels put German luxury brands to shame; there is no options list for the Genesis because Hyundai NZ has already ticked every option box available. Panoramic sunroof, auto-levelling headlights, 17-speaker Lexicon sound system – you name it, it’s got it.

The active safety features like heads-up display, lane-change assist and blind-spot detection are worthy of special mention, being effective and non-intrusive. In fact, all the on-board equipment is well-laid out and effortless to use, not something you can say about all luxury cars which have delegated many basic functions to a computer interface controlled by a mouse.

Most people who saw the car thought it looked fantastic, and it does. It’s a head turner, and you just know the envious onlookers don’t realise they’re ogling a Hyundai. The usual game with Korean cars is to look for hints of other brands they’ve copied. The Genesis design truly stands on its own merits.

Did we feel we’d taken a huge step down when we had to return the Genesis and slide back into the XR6? In respect of luxury, refinement and specification, yes.

Dynamically though, the Falcon feels sharper and better sorted through a series of fast corners. Chalk one up to the Bruces then.

Actually, chalk two up to the Bruces, because as a value proposition, forty-something grand for an XR6 seems a better deal than $99,990 for a Hyundai. Or is it? You’ll pay $30,000 on top of that for an equivalent European car, then you’ll have to tick a few expensive option boxes to match the Genesis for kit.

Overcome the brand snobbery that afflicts the luxury car buyer and the Genesis looks like a good buy. Convincing customers that the badge is worth it won’t be easy, but that’s what we said when Hyundai launched the Santa Fe at prices up to $80,000 and there are plenty of them on the road now.

Winds of change blow at Hyundai

It doesn't seem too long since Hyundai was the new kid on the block, but the last decade has seen it emerge as a key player.

Following the meteoric rise in the SUV market over the last decade, Korean manufacturer Hyundai has launched a small SUV.

Leave the anorak at home

DIESEL CARS were long ago the preserve of anorak wearers obsessed with fuel economy statistics that they neatly recorded in log books.