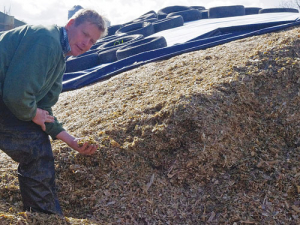 Australian farmer Chris Nixon has fed out his total storage of 5000 tonnes of dry matter and continues to buy hay and grain.

With feed costs almost doubling, one drought-stricken Australian dairy farmer has been deciding to regularly sell livestock. He would like the government to provide rate relief for farmers affected by drought.

Chris and Helen Nixon, with farms in the Orbost district and Cann River in East Gippsland, Victoria own an Angus beef and two dairy herds. As well as hay, he has fed out 5000 tonnes of silage. But the fodder price has increased from A$350 to A$660/tonne.

In late August, they sold most of their remaining Angus cows, steers and heifers, retaining a core breeding herd. Nixon expects to sell dairy cows in September.

“We have a plan that we instigate early: when it comes in dry we start earmarking cattle to sell,” Nixon said.

Weaning began before Christmas and 200 cows were sold in June this year. In August, 11mo Angus steers and heifers were sold. The steers average $780, weighing under 300kg; the heifers returned an average $630.

“I prefer the Angus cattle gone, even though we’d normally retain the steers to grow out. We weaned early with the idea that if it rains we’ll have pasture,” Nixon said.

“If it rains we can grow a heap of silage and feed the 500 cows in the milking herd at Orbost.

“But we don’t have the pasture and we’ve fed out 5000 tonnes of dry matter. We put the silage away in a bunker for conditions like this but it’s all gone.

“We’re well into our second year of trying to build a feed wedge and it’s not happening. The next decision will be to sell 150 dairy cows. We need to gear up production.”

The notable Angus herd now numbers 100 cows and 110 of the best heifers.

“Give us rate relief, that’s a substantial amount of money,” Nixon said. “Some farmers in the Orbost district would have rate bills above $100,000.”

He called on state and federal governments to develop drought and water policies that work for farmers.

“Farmers are expected to look after the triple bottom line, but it’s got to be a two-way conversation,” Nixon said.

“The problem with drought policy is no one focuses on drought until it happens.”