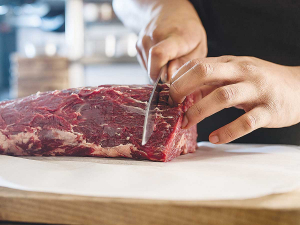 B+LNZ claims its Taste Pure Nature campaign continues to build momentum in both China and the US.

According to Beef+Lamb NZ, in the first few days of a Taste Pure Nature retail campaign in Beijing, crowds of people visited the high-tech 7 Fresh stores to experience NZ’s beef origin story through curated in-store experiences.

The in-store experiences at these high-end retail stores are a natural place to raise the profile of New Zealand beef, according to Rick Walker, ANZCO Foods’ general manager sales and marketing.

“While it’s early days, our monitoring shows sales volumes have increased and we are pleased with the results so far,” he says.

“The collaboration with B+LNZ and Taste Pure Nature is a positive way to start building long term brand awareness and all indications are that there is good future potential for ANZCO Foods and New Zealand beef in China.”

It’s great to work with ANZCO Foods on this integrated campaign that starts telling the New Zealand beef story online, and in the elevators of high-end apartments in Beijing, right through to the in-store experiences and tasting the product,” he says.

As part of the campaign on popular Chinese social media channel ‘Weibo’, influencer Hu-Hu-Sheng-Wei-Er (Tiger) talked to his followers about New Zealand grass-fed beef in a video post, which has been viewed more than 284,000 times.

“All qualities associated with New Zealand beef, so this campaign is joining the dots to let them know about our amazing product.”

Beeby says the campaign is also running during Golden Week, celebrating the founding of the People’s Republic of China, where the Chinese Government encourages domestic tourism.

This year, the mid-Autumn Festival landed within the Golden Week, putting an extra spotlight on family gatherings and food.
He says Taste Pure Nature’s momentum continues to build in both China and the US with more meat companies participating.