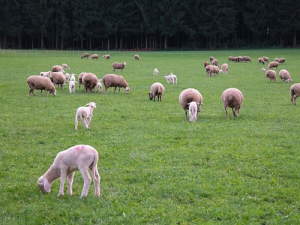 Strains of the helicobacter bacteria, which live in the stomach, are now believed a possible cause of abortion in ewes.

Strains of the helicobacter bacteria, which live in the stomach, are now believed a possible cause of abortion in ewes, following MPI investigations.

Further abortion investigation work and surveys in different sheep rearing regions of New Zealand are now required, the NZ Veterinary Association was told in a paper.

This will assist understanding of the true impact of this organism, whether it presents an emerging condition, and whether research into preventive measures or treatment is warranted.

The investigation was done by the MPI Investigation and Diagnostic Centre (IDC) at Wallaceville, Upper Hutt.

The centre manages the investigation of any suspected exotic animal disease, and has an expanded remit that includes all cases where a new or emerging syndrome is suspected. This responsibility covers all animals, including managed, wild and feral populations, in the ground, freshwater and marine environments.

IDC presented the discovery of helicobacter associated with sheep abortion as part of that expanded remit and as an example of improved laboratory diagnostics.

In NZ the agents most commonly diagnosed in sheep abortion are campylobacters, toxoplasmas and Salmonella Brandenburg, accounting for

about 80% of sheep abortions where a causal agent is identified.

After a significant outbreak of abortion on a Southland farm in 2009, where those causes had been eliminated, further investigation was made into liver tissue. Results were consistent with various strains of helicobacter, so a provisional diagnosis of abortion associated with this agent was made.

To assess the association of helicobacter with sheep abortion outbreaks, MPI, in partnership with Gribbles Veterinary Pathology (NZ), Massachusetts Institute of Technology (MIT) and The Forsythe Institute (TFI, USA), surveyed abortion submissions from the 2012 and 2013 lambing seasons, in the southern South Island.

A total of 84 submissions from 66 farms were assessed, and a comparison was made of the proportion of laboratory submissions culture positive for helicobacter, from flocks in which no other agent had been identified, compared to flocks that had a known cause of abortion.

“The finding of helicobacter bacteria in flocks experiencing abortion, and in which common endemic agents of abortion had been excluded, is an important milestone,” the ICD paper says.

The paper called for more investigation in NZ.