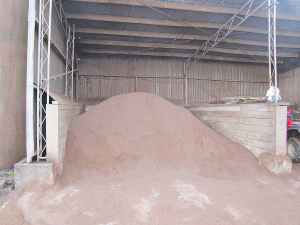 In recent years, Fonterra has been encouraging its farmer suppliers to cut back on PKE usage.

However, environment lobby group Greenpeace remains critical of the co-operative.

After years of organising protests outside Fonterra offices for its role in PKE imports, it says the co-op’s decision to sell its 50% stake in a company that imports PKE “highlights a concerning relationship”.

The co-op last month sold its 50% stake in Agrifeeds to joint venture partner Wilmar International for $27.5 million. Fonterra will continue to be the exclusive seller of Agrifeeds PKE products through its Farm Source stores.

In an email to farmer suppliers, Farm Source group director Richard Allen says as part of the co-op’s continuous review of investments, it has concluded that ownership of Agrifeeds “is no longer necessary to ensure farmers have access to sustainably sourced and competitively priced [stock] food”.

In recent years, Fonterra has urged its farmer suppliers to cut back on PKE usage, as international customers demand a better sustainability footprint for food products.

Greenpeace executive director Russel Norman claims Fonterra has now handed complete control of its PKE imports over “to a company that has failed to end deforestation and peatland destruction in its supply chain”.

PKE is a by-product of the palm oil industry, which Greenpeace claims causes rainforest destruction in Indonesia.

The Agrifeeds joint venture was set up in 2008.

“During periods of poor pasture growth or quality, access to supplementary feed plays an important role in maintaining productivity on-farm and the wellbeing of your herd,” he told farmers.

Wilmar has confirmed that there will be no change to the product range available in NZ.

But Norman wants the Government to phase out imported feed like PKE.“The palm industry has done more than enough damage.

Not only is the production of PKE terrible for our climate, New Zealand’s bloated dairy industry relies on PKE to feed more cows than the land can sustain,” says Norman.

“With agriculture being New Zealand’s biggest climate polluter, we need an urgent shift away from this high-input, industrial agribusiness model towards regenerative farming that works within the limits of the land.

“If this Government is serious about the climate crisis, they must act now to phase out imported feed, like PKE, which is driving intensive dairying.”