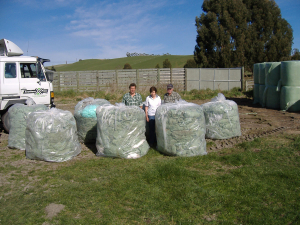 The Peters family (from left: Philip, Noeline and John) with the very first Plasback collection in 2007.

In the past 13 years it has collected more than 20,000 tonnes of waste plastic from farms up and down New Zealand.

While 2021 was a rough year for many, Plasback has delivered some good news for the environment. Over the past six months, the rate at which silage wrap and other used plastics directly from farms around the country has nearly doubled.

In the period from 1 July to 31 December, Plasback collected 2,500 tonnes of plastic. This compares to 2,600 tonnes in the entire year prior to that.

"It is heartening that more people in the farming community as well as manufacturers and distributors are now making an effort to recycle their waste.

"More and more companies realise they must provide their customers a way to dispose of their water responsibly."

Shaw says a big boost to Plasback has come from Fonterra's Co-operative Difference initiative, which came into effect in June.

Under Co-operative Difference, up to 10 cents of Fonterra shareholders' milk payment comes from their efforts to farm sustainably. One measure they can take to achieve this payment is to recycle their used plastic.

"This has prompted a big increase in demand for our on-farm collection service and we have put the infrastructure in place to be able to handle it.

"We recently commissioned three new balers, which brings our total up to nine balers across the country enabling us to process the plastic we gather more efficiently," Shaw says.

He says the new balers are at Kaiwaka in Northland, Te Puke in the Bay of Plenty, and Waimate in South Canterbury.

"We have also appointed a new collector in Southland, CMC Contracting. They have invested in new equipment so they can get on top of the backlog that has built up in that region."

Recently Plasback caught up with its very first customers, John and Noeline Peters.

John says that in 2007, when Plasback first picked up their recycling, they had a deer and cattle farm at Levels Valley, near Timaru.

“We were feeding out seven or eight bales of baleage a day, and did not want to just burn the plastic because we were next to a pine plantation. On Rob Cope-Williams television show Rob’s Country, I heard about this new programme to recycle silage wrap and it sounded like a good idea to me,” John says.

“To find out more, I went to the South Island Field Days at Lincoln with Noeline and my son Philip, and we looked all day before we found the Plasback stand.”

At that time, Chris Hartshorne had recently come out from the UK to set up the Plasback collection service. Plasback provides farmers a plastic bin and liners to collect their used wrap, but at that point Chris only had the liners on hand.

“We took some of the liners but you cannot really fill them up properly without the bin. So we just stored the old silage wrap in the back of a grain shed until we got a bin,” John says.

The Peters family diligently recycled their waste silage wrap for the next 12 years, until they sold their farm. The story does not end there, however.

After the farm was sold, Philip Peters went to work for Geoff and Joy Haywood at Mt Horrible Station. When Geoff and Joy wanted to start recycling their silage film, Philip gave them the original bin from his parents’ farm, so it is still in use.

Shaw says since Plasback picked up that first load in 2007, it has now collected more than 21,000 tonnes of waste plastic.

“Using the sustainability agency Encon’s CO2 offset formula, this amounts to the carbon bound by 1,111,250 trees.”

On-farm plastics recycler Plasback says its hard work over the last 15 years is now paying off.