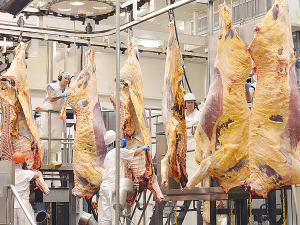 The price of beef imported into the US has reached levels not seen since late 2019.

According to Rabobank's latest Global Beef Quarterly report, New Zealand producers are heading into the spring in a great position.

RaboResearch analyst Genevieve Steven noted that farmgate pricing in New Zealand has remained elevated over the past three months.

She says the high pricing comes off the back of strong demand from China and suppressed beef export volumes from Australia. Argentina's decision to curb its beef export is also helping prices rise.

"Pricing across both islands is tracking well ahead of last year and currently sits 10% above the five-year average," says Steven.

New Zealand beef exports for the first half of 2021 were 3% ahead of 2020 volumes: while volumes to the US and Canada were down 26% and 56% respectively, exports to China rose strongly and were up by 21% on the first six months of last year.

But while volumes were higher, export earnings for the first half of the year were back by 5% as a result of a stronger NZ dollar and greater volume going to lower-value markets.

However, the Rabobank report says New Zealand beef pricing is expected to remain strong through to November.

"Global supplies of beef are limited whereas global demand remains strong in a number of markets.

"The quantity of beef being traded globally is relatively tight, which is helping support the markets. Strong demand for beef from a number of markets is assisting prices."

Global supply of beef is relatively limited as the quantity of meat being offered by Australia continues to be much less than normal as farmers look to rebuild the number of stock being run on their properties.

Kilsby notes that the quantity of Australian beef entering the US is only about half of normal levels. Argentina temporarily banned some exports, which also tightened up supply.

The restrictions - imposed by the Argentinian Government in late June with the aim of boosting domestic beef supply - limit Argentinian beef exports to 50% of the average monthly volume. Argentina is the world's fifth largest beef exporter and the second largest supplier to China.

She says while Argentina's restrictions are being reviewed, it's unlikely the new export system will end in August.

If restrictions remain in place until the end of the year, beef exports for 2021 could drop by 23.5% year-on-year.

“This is the scenario that we believe to be the most likely, as it would meet the demands of the production sector and raise the availability of beef on the domestic market,” Steven says.

At this stage, Argentina’s export reduction is having little, if any, direct impact on New Zealand beef exports. “However, it could help to provide a pricing-floor in the market," she notes.