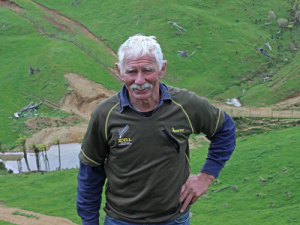 Steve Borland says the sediment trap (background) has helped prevent the loss of tonnes of soil.

When 300mm of rain fell in four hours and blew out a year’s worth of environmental mitigation work, Steve Borland admits “it just about broke me”.

But the Oparau, Waikato, deer and sheep farmer is no quitter. Now the new fencing is repaired, and work to protect the fragile volcanic soils and water quality on the farm – Shabor – is underway.

Borland, with wife Judy, son Chris and business partners Bob and Jackie Sharp, is winner of the NZ Landcare Trust Award in the 2017-18 Deer Farmers Environmental Awards. The award is for excellence in sustainable deer farming by action on the ground.

Fellow deer farmers and industry leaders gathered at the Borlands’ home on November 9 for a formal presentation of the award and tour of the farm. The same team had also won the industry’s premier Elworthy Environmental Award for their vision of a sustainable farming system.

NZ Landcare Trust chief executive Dr Nick Edgar was at the presentation and complimented the Borlands for their energy, skills and sheer hard work.

He said the award judges had been inspired by the careful planning and attention to detail such as the siting of fencelines to minimise runoff and protection of native vegetation to help enhance biodiversity.

“The combination of sensitive soils, high rainfall and livestock on this property means that sediment loss is the greatest environmental risk.

“The winners have shown a complete understanding of animal requirements and how they fit within the property.”

Borland said the flood last year destroyed much of the fencing they had built to protect the Mangahoanga stream that flows into the nearby Aotea Harbour. But the work to completely exclude the stock is now due to be finished by March next year.

He’s also recently built a sediment trap on the property that he estimates has already retained 20 tonnes of sediment that might otherwise have flowed out to sea.

Shabor, co-owned by the Borland and Sharp families, bought the Oparau farm in mid-2014. It was run-down and needed 35km of deer fencing, tracks and capital fertiliser. Borland said he soon realised the topography and light Mairoa ash soils over clay made the farm unsuitable for some stock classes and farming practices.

“This country is not right for cattle and we keep only a few to help with pasture control. It’s also unsuitable for cultivation and cropping; our livestock are fed grass and clover and that works well.”

The main livestock enterprises are a Wiltshire sheep breeding and finishing flock, and a red deer breeding herd that supplies stags for a major deer velvet antler business run with a separate farm.

The Borlands are involved in a nationwide AgResearch investigation of the impact of deer farming in high country on water quality.