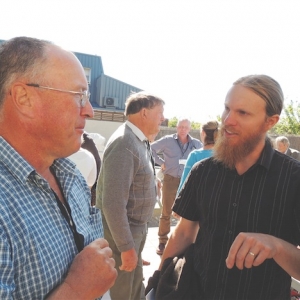 Delegates attending the recent NZ Grasslands Association conference were told that the entire rural sector needs to work together to lift productivity if the challenge of doubling primary industry export value by 2025 is to be met.

“For anybody seated in a comfortable position, it’s time to get up and do your bit so that the various productive sectors can grow,” New Zealand Grassland Association president Warwick Lissamann told delegates at the association’s conference in Alexandra earlier this month.

In a broad-ranging address to his audience of scientists, farmers and rural professionals, he warned of pseudo-science and a proliferation of fertilisers and plant growth enhancers, many with little scientific data to support their use. “A single analysis from one season is not proof!”

Smart marketers and salespeople could make unwary farmers “believers” in products “at which point you stop asking questions,” he warned. “Sellers always have to be challenged: ‘where is the data?’.”

That’s particularly the case with products claiming to provide beneficial bacteria or fungi, or to benefit such organisms in the soil, he said.

For scientists, debunking pseudo-science is frustrating as they’re often required to prove the same point time and time again – time which could otherwise be spent on research, or communicating research, that would take farming forward.

Lissamann not only called for more engagement between scientists, farmers and the rural sector, but with the whole of New Zealand. “Collaboration with the other 3.8 million New Zealanders will be essential. We cannot do this alone.”

Large, corporate farm businesses would play an increasing role, but a problem with such an industry structure is they reach a scale where research is privately funded and not shared, he warned.

Currently there’s little to stop such a trend but family farms could “evolve in ways we’ve not considered” to retain their place in the industry, he suggested.

Technological advances should focus on things farmers need to improve productivity, and while there are plenty of IT-type innovations emerging, there are some notable gaps, such as in direct drills, where bigger and heavier is the trend. “No-one has developed a lightweight drill for hill country.”

Improving productivity from pastoral hill and high country in New Zealand, and globally, holds huge potential to meet the challenge of feeding the burgeoning world population, which will need 70% more food by 2050, Lissamann continued.

However, food production research is focussed “almost entirely on food crops”, and grassland gets relatively little investment. That’s despite 3.5b ha of farmed pasture globally – twice the area cropped.

New Zealand’s diverse geography and consequent range of pastoral farming systems make it best placed to lead international research into improving production from such areas while safeguarding other values, he suggested.

And as an association focussed on pastoral production, the NZGA is well placed to facilitate that but the conference “family” atmosphere of collaboration and communication, researcher to researcher and farmer to researcher, needs to extend year-round.

“We need to trust each other and learn from each other… It’s up to research to work with farmers to achieve a step change.”