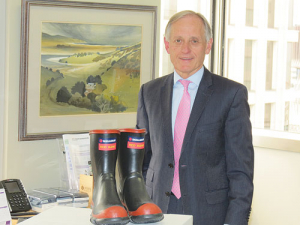 It was once jokingly said that the next most-important job after the All Blacks coach is the head of the Ministry for Primary Industries.

Joking aside, there is some truth in this because MPI plays a largely unsung, yet critical, role in the lives of every New Zealander.

With the prospect of a world war unlikely, the next most-serious threat to NZ is in biosecurity, food safety, trade and people’s perception of how the precious land we live on is farmed.

For the last five years, Martyn Dunne has been the director-general of MPI or, if you like, the guardian of our nation. It is he, like his predecessors, who has worked to protect our largely pristine environment from harmful overseas incursions.

MPI, with 3000 staff, is not the largest government department, but it administers more regulations than most others and it has a range of operational arms to enforce these regulations.

It also has many different tasks to perform, including very public biosecurity at airports, animal welfare tasks, and providing input onto trade negotiations and market intelligence for the primary sector.

The challenges of MPI have required Dunne to apply his extensive military, diplomatic and administrative skills to the daily challenges it faces. As the head of MPI, he has not sought the limelight, but quietly and firmly worked behind the scenes to build a department that is fit for purpose, fit for the times and future-proofed to give his successor a head start.

Dunne has been a true leader in all his public service roles and the primary sector has been well served during his tenure in the role. Being a public servant is not easy – the critics are often caustic and uninformed – but under his watch MPI has fronted this professionally and made changes where necessary. But it hasn’t backed-off making hard decisions were necessary.

Industry leaders have acknowledged that Martyn Dunne has made MPI a better organisation during his five year stint there. And as well as acknowledging this, we must also recognise that his entire 50 years in the public sector have helped make NZ a better place for all.