Dog on weed a friend to all 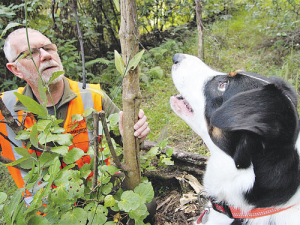 John Taylor and Rusty at work.

Invercargill dog trainer John Taylor has been in demand in the Waikato and other districts using his 8-year-old border collie Rusty to sniff out exotic plant velvetleaf which is a big threat to pasture.

Rusty and Taylor’s other dog are also used on other pasture plant pests and in conservation efforts.

Taylor and Rusty were in Northland recently to show council staff and volunteers how to train dogs to find pest plants.  They discovered batwing which threatens native forests. And they may be used in Northland to battle two other weeds which threaten pasture.

Taylor has worked a lifetime with, for example, sheep dogs and rescue dogs; he started in biosecurity work during the velvetleaf incursion in Southland.

The question popped up, “I wonder if a dog could find that stuff?” After battling Environment Southland he got a few samples and did some training.

“I guessed my way through it and then I found out the dog was picking this stuff up real easy. It has got such a scent I can even smell the damn stuff,” he told Dairy News.

The Ministry for Primary Industries then got involved, paying for a three-week trial, but decided not to go ahead with dogs. But Taylor soon got busy in Waikato, leading to his travelling the North Island with Rusty on a velvetleaf hunt.

He says the initial trial with Waikato was “so successful; he was picking up plants they would never ever see. I was up there for a full week around the Waikato area.”

Horizons Regional Council then contacted him and he went into Masterton, Levin, Palmerston North and surrounding areas, very successfully picking up many plants.

“We won’t be going back to Masterton again; we reckon we’ve cleared that,” he said.

Waikato still has more work to do and Taylor says he has found velvetleaf on two properties in Henderson, west Auckland, where they thought they didn’t have it.

He found some in Rotorua last year but it was sprayed and he didn’t find any this year. He also went to Napier and found velvetleaf on two properties assumed to be clear but they hadn’t got it all.

He spent five days in Northland last month, showing a dozen dog owners how he trained his dogs. While he reckons they will get three or four dogs out of that bunch, Northland will probably need about 10 dogs for the work it needs to do.

They were training for batwing passion vine that gets into native bush. But the Northland Regional Council is also looking at using dogs for nassella grass.

“That is a real dangerous one: the cattle and sheep can’t digest it. It fills their stomach, balls up and they basically starve to death,” says Taylor.

White briny may also be targeted because as a tuber it is hard to find when stock have eaten the leaves.

Dogs also could be used in Northland to find turtles released into waterways by “idiots”, and possibly stray koi carp.

Taylor will return to Northland in six to eight weeks to see how the trainers are progressing and should be able to tell then which dogs will make the grade. He says he is lucky with Rusty who is very good natured and travels well.

For the Chilean needle grass effort in Christchurch he used his dog in trials to find out if the pest is scented enough for a dog to find it. Two girls in Christchurch have now trained their dogs.

The dog he trained for velvetleaf was one of two he initially trained for LandSAR Search and Rescue work but he is no longer involved.

Taylor (67) has trained dogs most of his life, including hunting, deer stalking and gun dogs. And he is now in a small group training five dogs for local disaster work.

His second dog, obtained by accident, came to him in a “bad way”. That dog is now brilliant at helping DoC to find patches of spartina grass in tributaries to the local estuary which were missed during spraying.

John Taylor plans to retire his velvetleaf dog Rusty at about 10.

“I will carry on with the young dog on spartina grass, but I may train him on other things; I’m not sure yet.

“That will be my last dog. Other people may want to learn about it; that’s why I went to Northland, just to pass on that knowledge.”

He doesn’t think farmers would necessarily have the time to train dogs for this biosecurity work.

“It is easy to train a dog for sheep; there is a standard set of commands and that is not hard to do; that is what I am using. I am basically using sheep dogs; both are collies, both are heading or eye dogs -- easy to train, they’ve got a brain.”

For velvetleaf he needs to be able to train the dog so it indicates a find.

“That’s the hard part; any dog can do the finding once you teach them the scent. But they have to be reliable and actually indicate to you they have found it.”

You have to build a personal relationship with the dog, Taylor says.

“You build a bond and relationship with the dog where you can tell without having all this fancy indication. My fella will go right to a plant and put his nose right on it.”

He had a case in Levin when his dog kept barking and indicating in one area but he and a biosecurity officer couldn’t find anything. Finally they realised a convolvulus vine was camouflaging a velvetleaf. You wouldn’t have picked it up visually.

“That’s where a dog comes in; when they are scenting they will pick that up. They can pick up really small plants too.”

The Ministry for Primary Industries has ramped up its efforts to contain the invasive weed velvetleaf.

Landowners and rural contractors are being urged to watch for pest plants.

The pest plant velvetleaf should be high on cropping farmers’ minds over the next few months.