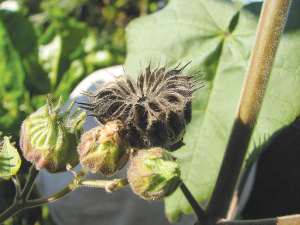 Velvetleaf with a blackened seed head.

The seedlings grow vigorously up to 2.5 m high and can produce seeds viable for up to 60 years.

The national outbreak in New Zealand in 2016 was reckoned caused by imported fodder beet seed.

Ongoing incursions in Waikato have been linked to infested maize crops and maize silage, unclean machinery moves and by stock that have eaten infected feed. The seeds can survive in maize silage and the guts of cattle, so can spread rapidly between farms.

Landowners and occupiers are responsible for controlling velvetleaf and should not allow any person to move, or allow to be moved, any velvetleaf propagules from a contaminated property.

And of concern to contractors is that no person may move, or allow to be moved, any cultivation or harvesting machinery that may be contaminated.

If a property owner suspects may have an infestation, they should contact pest plant staff on 0800 BIOSEC (0800 246732). Council staff will help develop individual biosecurity plans.

The council says plants that have not developed seed heads should be hand pulled, but if seed heads have formed, place a plastic bag over the seed capsules and flowers, tie firmly, then bend the stem in half, pull the plant, then place it in a second plastic bag.

Where seed heads have blackened, a drop sheet should be placed on the ground to catch falling seeds. Then resort to the previous strategy and clean up any dropped seed. Soil may also need to be removed.

In pasture, if small seedlings are abundant, they should be treated with 2,4-D, but larger plants will need to be targeted individually with aminopyralid/triclopyr.

In maize crops, use a pre-emergence application of acetochlor plus saflufencil to kill early weeds. After emergence, an application of topramezone, dicamba or mesotrione will help kill plants that may emerge later.

Tips for stopping the spread

Velvetleaf can spread by soil movement, stock feed and equipment such as diggers, crop harvesters and general farm machinery.

Farmers should protect their properties from velvetleaf and other serious plant pests by:

ensuring supplementary feed brought onto the farm is weed-free

ensuring manures, aggregates, soil and sand brought onto the farm is weed-free

checking feed crops before purchase to ensure they are weed-free.