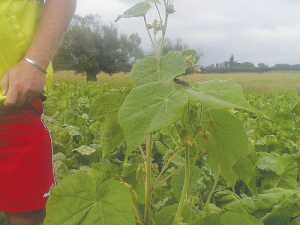 Velvetleaf infestations are on the rise.

The Ministry for Primary Industries has ramped up its efforts to contain the invasive weed velvetleaf.

MPI has appointed community outreach officers to work with farmers in the worst affected regions.

This comes as Waikato Regional Council reports a big spike in velvetleaf infestations, up from 36 at the start of the 2017-18 season to 53.

MPI has also confirmed two more cases in the Auckland region, but does not yet have up-to-date figures for the other regions.

It now has staff working in Waikato, Canterbury and Southland, advising farmers and rural contractors on how best to tackle velvetleaf, which is among the world’s most invasive pest plants, competing with crops for space, nutrients and water.

In the South Island, the infestation is mainly linked to six fodder beet seed lines, imported in 2015, found to be contaminated with small amounts of velvetleaf seed. Hundreds of properties received the seed lines and remain under surveillance but relatively few velvetleaf plants have been discovered.

“Now is a good time to go and check your paddocks for velvetleaf that may have popped up this growing season, particularly if you have put that paddock back in crop. When it goes back into pasture it tends to remain dormant.”

Hands said farmers who received the suspect seed would know who they are and should have a management plan.

“Part of my role is checking on those people and finding out how they’re getting on with those management plans and making sure they are still being vigilant.”

Waikato Regional Council pest plant team leader Darion Embling said the number of infected properties in the region has jumped to 53, with three discovered so far this season.

There are two clear pathways for the spread, he said, the main one being harvesting machinery going from one property to another without being properly cleaned.

“Machine hygiene is number one; we’ve been saying this for years, actually.”

Second is maize silage. Seeds from undetected velvetleaf plants can survive both the silage-making process and going through a cow’s gut.

But Embling said it is good that the Rural Contractors Association and the maize industry are now helping with containment efforts.

“Ultimately it is their businesses which are going to get impacted if this truly gets established in Waikato.”

Potential losses are estimated at up to 30%, he said.

John Sanson, manager recovery and pest management for MPI, said the most up-to-date and complete figures nationally are for the end of last season, when there were about 1100 affected properties -- either confirmed finds or having received the contaminated fodder beet seed. Of those, actual velvetleaf plants had been found on 236 properties.

“We have not had any reports of new finds so far this season outside these two regions.”

He said MPI continues to work with regional councils and other partners to support the rural sector.