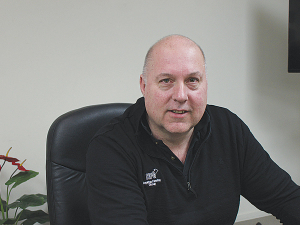 In fact he was not keen to enter any awards — dairy business, company awards or industry awards.

But he was pleased he did.

Southee, who manages a Hopkins Group farm near Longburn, Manawatu, won this year’s Dairy Business of the Year (DBOY) Best Farm Performance award for the lower North Island. It included Wairarapa and Taranaki.

While he did not win the overall final he was a finalist. The big prize went to a Northland equity partnership with 17 shareholders. He found out in June.

“The finals were held in Queenstown,” he said. “It was exciting but I thought I might be out of my league there.

“But the others were all average guys and down to earth. The thing we all had in common was not being prepared to sit back and wait for things to happen.”

The Hopkins Group was started by John Hopkins, an Englishman who arrived in New Zealand as a young man, with 1 pound in his pocket. He is older now, but still driven, and the company now owns 10 dairy farms and three run-offs. Southee manages Waihora farm.

“Initially I didn’t know about Dairy Business of the Year and I don’t usually like to enter anything, but the chief executive, Shaun Back, told me about it and said he would like to put the farm in,” says Southee.

There is a stable workforce and we all compete well against other managers, he says.

“And Shaun Back reckoned it wouldn’t mean much extra work for me”, he said.

It did mean Southee had to put together a lot of facts and figures. “Then 10 days later I found out I was in the finals and it was a big surprise to me.”

He says he was not motivated to go for any awards. “I don’t mind the farm being judged, but not me.”

Back says the Hopkins Farming Group felt Shawn Southee would do well and supported him to go into the DBoY.

“He shouldn’t have been surprised. We had a lot of confidence in him. He utilises grass really well and does well against other people.”

Southee has been at the farm since 2006. Before coming to the Manawatu Hopkins farm he worked as a manager at Landcorp Farms (now Pamu) at Ngatea.

“Originally my wife and I were looking for an equity partnership. There used to be lots around, now there aren’t many. I knew John Hopkins and had several interviews. Then I came south as a manager.”

There was a shareholding, not in his farm but of all the Hopkin’s properties. He sold his shares and he and his wife bought a lifestyle block at Kairanga.

Southee lives there and says it is nice having something of his own.

But it is managing the Waihora farm which won Southee the regional award as part of DBoY. “It made me analyse the business more and in depth.”

“Most of that increase was done through pasture management.

“We put a lot of effort into pre and post pasture use.”

It is a mainly grass growing farm but it feeds silage made on the property and palm kernel and maize.

“We feed a mix of that in spring. It helped put weight on cows. Once they lose weight it was so harder to put it on.”

Southee says cows calving in autumn provides milk for the winter contract of 420 kgMS/day and are generally in better condition than the spring calvers.

He says they only milk 300 cows through the winter months which enables staff to take time off.

• 340 effective hectares. A total of 360 hectares including drains , ponds and the effluents .

• A fulltime trainee from Palmerston North Boys High School works 40 hours a week. He lives at home. He is on a Federated Farmers work scheme to see if he is suited and likes dairy farming.

• They winter off farm 50% of the autumn calvers and 90% of the spring herd. It takes the pressure off the on farm situation.

• Heifers graze at a Hawke’s Bay property and come back in top condition.

• Each farm gets its own heifers back. “We breed them and put effort into them.”

• The Hopkin’s Group farms all use Jersey bulls for tail-end cows.  Southee would like to use beef bulls and have fewer bobby calves.

• Milking at peak in spring takes about 3.5 hours and two people milk.

• Cows are milked twice a day.

He says they looked at human resources, staff training, labour and staff turnover and health and safety.

Donaghy says half the judging was return on capital, 20% was on operating profit and 15% each on the environment and human resources.

He says they had all the figures and took into account environmental factors such as flooding or drought.

”They had to be compliant and we looked at their nitrogen budget, leaching phosphorous and precision irrigation.

“We didn’t judge on this, but we trialled greenhouse gases emissions this year,  such as carbon dioxide and nitrous oxide.”

Donaghy says it was a rigorous process with the awards based on information from the 2017-2018 season.

He says the judging, while systematic, was not too difficult.  Each farm required a lot of reading but it didn’t take the judges long to rate them.

“People can enter the awards every year. Many farmers enter year after year  to help them with figures and benchmarking.”

They can only be judged every second year.

“People like being benchmarked against their peers. Farmers look at efficiencies and they can take their figures to the bank manager.”

Donaghy says they get an up-to-date land valuation and look at real figures, often double and triple checking information.

“It is fun and work too.  I do it as part of my input into the dairy industry.” 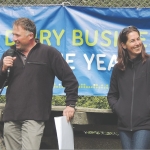