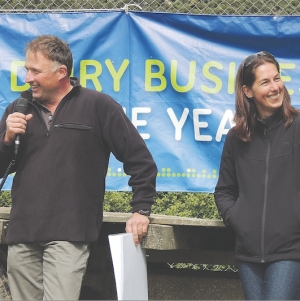 THE SWISS are known for their precision and it seems Martin Furrer is no exception to that rule. He and wife Linsey run Longland Dairies, a 1250-cow, 312ha equity partnership at Hinds, Mid Canterbury. As a field day on the property last week unfolded, their meticulous management became clear, not that Furrer was giving too many secrets away.

“I’m not quite a Kiwi yet but I’m getting there slowly,” he quipped as he outlined his Swiss upbringing and how a one year farming exchange to New Zealand as a student prompted a return six years later to go dairying fulltime.

“In Switzerland if you’re not from a farm background there’s not much hope of becoming a farmer.”

Their return to NZ was in 2003. After three years sharemilking in Bay of Plenty they moved to North Canterbury for a season, then Longland Dairies, in due course becoming equity partners with two other investors.

“They are top of the line in farm performance and profitability,” Interlact executive director Helwi Tacoma told the field day crowd. “This is not just a one year wonder. They’ve done this for a number of years,” he added, presenting the headline figures from account benchmarking package, RedSky (see table).

Tacoma picked three main drivers for the farm’s stellar performance, comparing them to a person’s heart, lungs and brain, though he stressed a body needs many other parts to function properly, and so it is with a farm.

“What Martin and Linsey are very good at is farming the gap…. Focussing on one, or the other alone is not going to get you there.”

Comparing that gap to the lungs, Tacoma labelled core costs as the brain of the business. “They’re really tight on their per cow costs and per hectare costs. They don’t spend where they don’t have to,” he said, joking that it was hardly surprising given Furrer’s Swiss and Linsey’s Dutch ancestry.

Furrer said Longland’s operating costs are “always below $4/kgMS and some years quite a bit less.” “We don’t have luxury items in the system, just the basic stuff. We definitely look at every cost and just keep a handle on it. It’s common sense.”

A back calculation from milk production, less the 1.1t/cow of supplement used – palm kernel, barley, and silage – put pasture harvested by the cows in 2012-13 at 18.6tDM/ha, the highest of the finalists by 2t/ha. “He gets his cows to eat a hell of a lot more feed and most of that feed is actually pasture,” noted Tacoma. “How?”

Furrer said they simply “do everything possible to get as much grass in them as we can.” “In general they’re on 12-hour breaks but sometimes we’ll feed them two, even three breaks in 12 hours. Before lunch we always go to look at the cows and if they need moving, they need moving.”

Target pre-graze cover is 3000-3100kgDM/ha, “slightly higher than the DairyNZ standard” but residuals are still taken down to 1500-1550kgDM/ha. Mowing pre-grazing is occasionally used to ensure residuals are achieved, but the mower’s never used behind the cows.

Pastures are a three-quarter tetraploid, one quarter diploid ryegrass mix with 4kg/ha of clover. About 15% is renewed most years, though this year that’s dropped to 3% in light of the low payout forecast. Any surplus grass is being taken as silage rather than taking paddocks out for renewal. “We’ll probably take two paddocks for silage every ten days this year.”

Cows are run in three mobs: heifers; big cows; smaller crossbreds. The latter mob graze distant paddocks as they handle walks of up to 1.7km to the shed better.

Breeding worth (BW) of the herd at 91 is “nothing outstanding” Furrer said, but they had spent quite a few years sourcing genetics from several different companies, domestic and overseas, to get the “model cow” they wanted. “But this year we’re keeping it simple with bull of the day.”

Jersey bulls, plenty of them, had just gone in with the herd last week after two cycles of AI. With no induction option come calving, bulls will be withdrawn “probably in mid January.”

While some at the field day suggested that was still late, given it would mean some late October calves, Furrer argued a cow in-calf gave him options whereas an empty didn’t.

The whole herd is metrichecked and three week submission rate this year was 96%. In the competition season (2012-13) six week in calf was 72% and empties 4.7%. “But we left the bull out until about February 18.”

The farm converted to dairy 17 years ago and is two-thirds irrigated by pivot, one-third Roto-Rainer. When he and wife Linsey arrived effluent was applied with a travelling irrigator and there was no storage, which caused “a lot of headaches.”

Their first step was to put effluent down a separate line slung under one of the pivots. Sounds simple enough but all stock water races had to be re-routed to avoid contamination. Now effluent goes through a two pond system before fluid is injected into the irrigation mainline. Outside of the irrigation season it’s diluted but when there’s water going on there’s no need.

“It cost a few bob to do but it’s been an absolute blessing. Effluent has become a real fertiliser whereas before it was a headache.”

The latest Overseer estimate for the farm is 69kgN/ha/year leached. “That’s probably fairly standard for irrigated dairy farms across Canterbury,” noted Joe Edlin of Headlands, presenting a session on the 15% of competition points allocated to environmental management.

Irrigation tends to inflate loss figures in Overseer, particularly if it is not managed to soil moisture deficit [SMD] readings from meters such as Aquaflex, he added. “I’ve seen that [irrigation managed to SMD] drop losses by 50% which is huge.”

Longland doesn’t manage irrigation to meter-readings and Edlin said it would be cheaper to look at SMD management options, which could be $10,000-20,000 to install and manage yourself or up to $7000/year for a fully managed contract service, than stand-off pads or other off-pasture facilities aimed at reducing urine patches and consequent leaching.

“But SMD alone may not be enough.”

Furrer acknowledged that Longland’s “high” stocking rate of 4.2 cows/ha and medium supplement input put it “in the spotlight” environmentally.

However, a field day he’d attended recently on a well managed pasture-only farm which wasn’t extending its lactation like Longland revealed losses there were “not much lower,” he pointed out.

“Overseer reports have no consistency… it just goes up and down like a yo-yo. I don’t think the science is there yet. We’re going to need proper facts, then we’ll adopt the best management practice, but we’ve got to get it right first.”

He admitted Longlands is “probably not at the forefront” on mitigating its nutrient losses but argued it’s sometimes better to be an early follower than to pioneer solutions that may subsequently prove not the best.