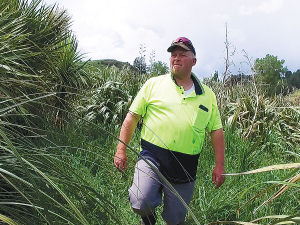 Gray Baldwin in his farm wetland.

They have a 200ha dairy farm with 900 cows and 160ha planted in maize. The rest of the property is in forestry or retired land.

In the mid 1950s, Gray's grandfather drained what was a swampy area and turned it into a 1.1ha grazing paddock.

According to Landcare Research, more than 90% of New Zealand's wetlands were lost in the past 150 years. As of 2019, the North Island had only 4.9% of its original wetlands left.

"Our farm is located in the Upper Karapiro catchment, which is one of the more sensitive ones in the Waikato region, mainly because it drains directly into Lake Karapiro," says Gray.

"We saw a long time ago that environmental stewardship of the land and society's interest in what dairy farmers are doing was going to get a lot more, not a lot less. We thought a wetland was a good thing to do, and if we got in early, there might be some assistance to do it."

In 2014, with funding from the Waikato River Authority, the Baldwin Family Trust teamed up with DairyNZ to restore the once thriving wetland back to its original state.

The basin area is surrounded by hills - between the farm's main raceway on one side, and Ngutuwera Stream on the other. Ngutuwera Stream is in the headwaters of Pokaiwhenua Stream, a major tributary of the Waikato River.

Excavation of the site was completed in 2015.

Gray says that consultation and engineering was vital in getting the foundations of the wetland system correct and a component of the development where the Waikato River Authority funding proved integral.

"When water comes in from off the farm, rather than coming in through a narrow channel we wanted it to spread out amongst all the rushes and the sedges which do the good work of denitrifying the water and cleaning it up. Getting that GPS perfectly level was a big part of the cost."

The wetland now captures runoff from 45ha of surrounding farmland and the race. Altogether including some of the smaller natural seepage wetlands on the sides of the hill, it services an 81ha catchment.

The nutrients then flow through a series of shallow basins which filter them out before the water enters the Ngutuwera Stream.

At the end of the wetland is a 15-metre culvert that connects to the Ngutuwera Stream. This culvert is also five metres lower than the front of the wetland, allowing the water to flow from the wetland into the culvert.

A total of 12,320 plants are planted throughout the wetland representing nine different wetland species. Wetland vegetation comprised native species including:

Surrounding the wetland are tī kōuka (cabbage trees), tōtara, mānuka and other native species planted by the Baldwins. These help intercept some of the groundwater coming in from the sides.

As part of ongoing monitoring for the project, NIWA implemented a telemetered system to monitor flows and water quality entering and exiting the wetland. DairyNZ and NIWA scientists found that the reconstructed wetland is proving its worth.

Over 12 months, the wetland removed 45% of the nitrogen, 77% of the phosphorus, 80% of sediment and 88% of E. coli, four of the main contaminants that are of concern throughout the Waikato and Waipā catchments.

The project has also seen an increase in the biodiversity to the area of the farm where the wetland is located.

Native birds have taken up residence because it offers food and shelter, which would not have occurred without those plantings, NIWA aquatic scientist James Sukias says.

"Particularly as the trees start to mature, they'll be adding more. It makes it look like it's meant to be here."

The Baldwins are partnered in an environmental showcase study led by industry body DairyNZ to restore the area to its natural state as part of a large scale wetland development.

The aim of the study is to provide Waikao farmers with advice and knowledge on wetland design and performance through a practical case study to reduce agricultural nutrient loads on the farm.

"We want to raise awareness with farmers of the significance of wetlands as a potential tool for reducing nutrient leaching," says DairyNZ water quality specialist Dr David Burger.

"Our ultimate goal is for this project to increase the uptake of on-farm wetland management throughout the Waikato Region and nationally."

Gray says he is delighted with what's been achieved and for the project to be a showcase for others. He says that as well as interest from media and industry organisations, the wetland has seen significant community engagement as well.

"We've had church groups through for planting days, and we've had walking groups who just want to come and enjoy the nice peaceful environment. You are conscious that when you're a landowner, it's your personal possession, maybe, but a part of society as well. The wetland is a taonga within the land that we have."