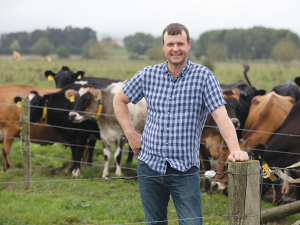 The dairy technology maker GEA says Payne had used its CowScout tags for five years and seen more days in milk as a key benefit.

Payne in 2014 was milking 500 cows with two fulltime staff. He was planning to grow his herd to 800 cows over three years (he achieved that goal) and he was working as an AB technician.

He had upgraded to a GEA iFlow 50 bail rotary platform with automatic cup removers and iPud automatic teat sprayers.

GEA says Payne told them it made good sense to add the CowScout technology.

“As AB technician, I had to be with the cows daily for nine weeks, checking and reapplying tail paint. But it was too time consuming,” Payne said.

“CowScout tags offered a simple, reliable and accurate solution and it fitted easily into our existing system.”

The tags monitor every cow in Payne’s herd 24 hours daily, providing highly accurate data on heat detection and eating and rumination activity. The data is available to Payne on any internet device.

Cows on heat are pre-drafted automatically at their optimal insemination time, GEA says.

Payne gets a notification and turns up to do the insemination.

“We also gained insight into optimal insemination times. We quickly realised we’d been inseminating too early. And we hadn’t known there was an optimal time of day.”

In the first year, GEA says, data indicated that the afternoons were the optimal insemination time for 80% of the herd. The following year, it was found to be mornings and last year it was evenings.

Another benefit is that they spend a lot less time on AB - they don’t use bulls - and still get good results.

Data is a bonus

An unexpected bonus was the eating and rumination data, Payne says.

“With CowScout, we can afford to tag every cow and we pick up mastitis and metabolic disorders before cows go down because we know how much they’re eating.

“When a cow isn’t eating as much as she should - for example she might go from eating 11 hours per day to just three - we receive an alert.

“These cows are drafted out automatically, enabling us to check them and treat them a day or two earlier than we might have done before. You wouldn’t get this sort of information by simply looking at the cows.”

China's domestic milk production has received a boost with the installation of the country’s largest milking rotary parlour.

GEA says its new iCR+ cluster removers are a game changer inside the milking shed.

Automation for teat care has arrived

An intelligent new Auto Mix + Spray unit from GEA’s FIL division is said to set a gold standard in teat spraying, providing farmers with an accurately mixed solution applied ‘fresh’ at every milking.

Yard washing, pumping and effluent screening gear will be on the GEA site at the Effluent Expo at Mystery Creek. The expo will be held on November 27 and 28.