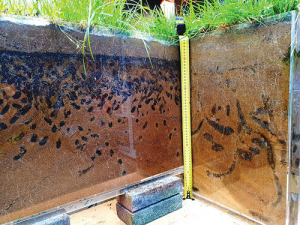 Partnership schemes are also running in Marlborough and Hawkes Bay.

“It will be good and exciting to see how they go.”

Plenty of science is backing the benefits of dung beetles, but it will take 10 years before the results of the Wellington release are fully known.

Schaller says he is “really happy and proud” the farmers were willing to put money into such a long-term project.

“We partnered with Dung Beetle Innovations, invested some money and secured about 30 whole farm releases which we could offer to farmers in the Wellington region at a discounted rate.”

The council decided to home in on one catchment, aiming for as much uptake there as possible.

GWRC’s offer of discounted beetle packages is focussed on properties along the eastern shore of super-trophic Lake Wairarapa, where the lake contains high levels of nitrates and other pollutants, some of which leach into the water from dung. The result is very low water quality in the lake and its surrounding wetlands, conditions Greater Wellington wants to reverse.

Schaller says using a catchment was seen as the best method of seeing what the beetles were capable of doing in burying dung, building soils and improving water quality.

“We had a lot of interest specifically from dairy farms in the Lake Wairarapa area…. Around that area we have a lot of dairy farms so we thought it would be a good area to do the catchment scale release.”

They started gauging farmers’ interest, going to discussion groups and talking to farmers and “before we knew it we had about 30 farms around the lake receiving dung beetles. Not all of those farms were dairy farms but the majority were”.

Four different species will be released in the region. The small ones have been ready for release from December until now, but from now on the bigger ones are emerging and will be sent for release.

“Dung Beetle Innovations [says] it takes the dung beetles about 10 years to reach capacity on a standard size farm such as 150ha with 300-350 cows or 2000 stock units equivalent. We are still in the early stages of setting up a monitoring programme.

“We want to look at whether these beetles are establishing and spreading and [how much] dung is left on a paddock, say, 24-48 hours after grazing. If that is all working well, all the other environmental and farm economic improvements should be happening as well.

“We saw it as something to improve the region’s water quality and soil health and benefit both the environment and the farmers,” says Schaller. “Because if you a pulling all that nutrient in those dung pats down into the soil profile you will get healthier, more active soils. This means you will also be able to grow more grass; they go hand in hand.

“In any ecosystem in the world where you had large mammals that evolved as part of that eco system you also had dung beetles.

“In New Zealand we have brought in all the large mammals and all the grasses to have an agricultural system but we didn’t bring in the dung beetles. So it is like the last piece of the puzzle to complete the cycle.”