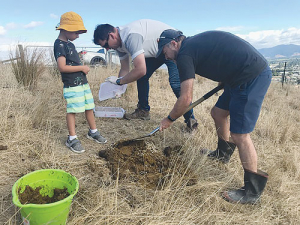 Marlborough District Council owns the park on the southern boundary of Blenheim.

The farm park for economic reasons has grazing animals – sheep and beef – and it has recreational park with walking and mountain bike tracks, communications manager Glyn Walters told Rural News.

The council, as landowner, decided to release dung beetles on the farm on the weekend of February 9 and 10.

“The reasons for that are multiple…. They provide a whole lot of benefits in terms of soil quality, soil stabilisation and water quality outcomes long term. Another issue long term is to try to get rid of cattle dung off the hill because [people] walk through the park, so it would be good to get the dung breaking down a bit quicker; so it has multiple benefits.”

Dung Beetle Innovations held a workshop pre-Christmas and the council invited farmers and stakeholders to explain the benefits of dung beetles. At least three sheep and beef farms have since been looking at releasing beetles on their own land.

Regionally the council is taking a lead to encourage other landowners to release dung beetles because it makes good sense in dealing with degraded catchments and water quality issues, says Walters.

Greater Wellington is leading the way with 49 farmers having responded positively to the partnership scheme and 200 dung beetle colonies now active.

Greater Wellington land management advisor Kolja Schaller says they partnered with Dung Beetle Innovations, spent some money and secured about 30 whole farm releases which they could offer to farmers in the Wellington region at a discounted rate.

The council decided to home in on one catchment to get as much uptake there as possible.

GWRC’s offer of discounted beetle packages is focussed on properties along the eastern shore of super-trophic Lake Wairarapa, where the lake contains high levels of nitrates and other pollutants, some of which leach into the water from dung.

Schaller says a catchment was seen as the best place for seeing what the beetles could do in burying dung, building soils and improving water quality.

“We had a lot of interest specifically from dairy farms in the Lake Wairarapa are... we thought it would be a good area to do the catchment scale release.”