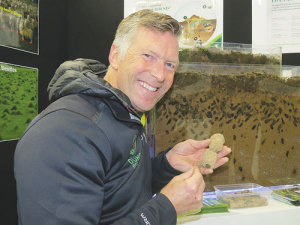 Peter Burke reports on the work of the dung beetle and a man passionate about their progress.

Dr Shaun Forgie, an entomologist who has studied dung beetles in various countries, is one of a small group of international experts.

Having seen what these small black creatures were doing overseas, he decided to bring them to New Zealand. This began in 2010 and, as expected, required a detailed proposal to a government agency (now the Environmental Protection Agency) to get permission.

Forgie says NZ has its own native species of dung beetle, but they are confined to the high country and some specific habitats.

“We had to look at places in the world that had the beetles that would suit our environment,” he told Rural News.

“The ones we have are from southwest Europe, Germany, France, Spain, southern England and parts of southern Africa. In the end, we brought in 11 different species.”

Forgie says there are 7000-plus species of dung beetle worldwide, but he chose species that are tunnellers. In Africa, it is common to see dung beetles rolling balls of dung down a road, but these were not considered appropriate for NZ.

“The tunnelling dung beetles we have don’t look as glorious as the ball rollers of Africa, but they are very effective,” Forgie explains.

“They go straight to piles of manure and immediately go to work making huge networks of tunnels in the soil, some down as far as 45cm.

“They make these tunnels and take all the manure off the soil surface and then bring up the soil from their tunnels so you get a mixing of soils.”

Forgie says the lifestyle of the dung beetle simply revolves around burying manure and turning it into small sausage-like balls then laying an egg in it, then the larvae feed on it and the new beetle repeats the process.

“So we get all the benefits of removing surface manure to beneath the ground which means fewer contaminants go into waterways,” he says.

Shaun Forgie has a facility near Kaipara and one near Auckland where he breeds the dung beetles.

These are normally sold in summer and early autumn to farmers. He also breeds dung beetles for specific environments; some species perform better in dry conditions and others in wetter areas.

So far he’s sold tens of thousands of these tiny creatures to farmers and councils, getting strong support from the Greater Wellington Regional Council and farmers in Southland and Waikato; they see the benefits of a friendly tool to reduce contaminant run-off into waterways.

“When I sell to famers -- a typical example is a 500-cow dairy farm or a 2500 SU sheep farm -- I would sell four colonies of up to 600 beetles per colony,” he explains. “I encourage the farmer to dump each colony in a paddock close to a pile of manure.”

Forgie wishes more councils could see the advantages of using and promoting dung beetles. He says in some places on farms it’s not possible to fence and plant trees close to waterways, but dung beetles can still operate in such places.