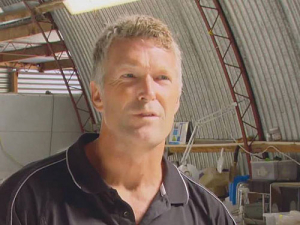 As a percentage of all visitors to the recent Fieldays, dairy farmers were a large group, from Manawatu, Waikato and King Country -- the main catchment areas for the Fieldays, says Forgie.

“DairyNZ is slowly looking into investing in the idea and Fonterra is slowly getting into it. The main interest is from iwi, Federated Farmers, Landcorp and Beef + Lamb NZ: they seem to be taking it by storm,” he says.

“We’ve started the ball rolling in waking people up to seeing this as one of the innovative sustainable solutions we need for water quality improvements.”

The idea of using the beetles in whole catchments is gaining momentum, he says.

“It is early days yet [on whether we use] existing funds or create new funds to be able to incorporate them.

“We have riparian planting and fencing; now we have to get our minds around using dung beetles as the only low cost, self-sustainable preventative measure for controlling pollution coming off pastures. It is the only preventative solution; all the others are basically fix-it jobs after the pollution happens.”

As a commercial entity Dung Beetle Innovations is in its third year but the project started about seven years ago with an end-user group called Dung Beetle Release Strategy Group making application to the government.

Commercial scale releases of the beetles are now in their third year demand seems to exceed supply, Forgie says.

“This year we’ve had such a large number of people wanting beetles that we have run out of capacity for our production facility to cope. We are looking at expanding our facilities even more to cope with the increased demand.”

Based at South Head, Helensville, they are looking at moving close to Auckland for better access to staff and casual workers during the peak season from December to April.

“We had a presence at Fieldays and that was hugely positive for us.

The company held a big meeting in Wellington with a couple of ministries, iwi, Landcorp and other entities that are now assessing national scale releases.

Forgie says the dung beetle proposal presents as the lowest cost option -- $10 and $41, respectively, for sheep and beef and dairy farms.

“Compare that to, say, riparian planting with an 8m buffer and no 8 wire fences. That is extraordinarily expensive – something like $2500 more per hectare. Dung beetles are a cheap alternative and the only self-sustaining one.

“We need to incorporate it as part of the toolbox -- use this with fencing and planting. It is a matter of people becoming aware that such a tool exists.”

But given that the first commercial releases happened only three years ago it is still early days to see those environmental benefits kick in.

“For a farm to get to saturation point, where they see economic and environmental benefits sustained, is probably around year nine onwards. We are in the third to fourth season for the earliest farms; we don’t typically see beetles present or covering them until year two or three. But some farms are giving feedback that they are seeing beetles or evidence of beetles after year one.”

They will take longer to establish in the south than the north, Forgie says.

It may take nine years to fully establish beetles on a farm, but it can take 15 years for riparian planting to fully function as an environmental tool.

Dung Beetle Innovations has permission for 11 different kinds of beetles but currently has seven on its books.

One type just out of containment is a winter active beetle. When this comes onto the books next year, the company will be able to offer year-round coverage. Currently the beetles available are active for about two thirds of the year.

Dung beetles are among the most studied insects in the world because of the services they provide, says Shaun Forgie.

“We are effectively completing a broken recycling process,” he says. “For 160-170 years we have not had a natural recycling process and that’s why we need these management practices today because there is nothing regulating the dung.

“It is a control process which has always co-evolved with livestock -- a no-brainer common sense solution.”

Current management practices such as stock rotation, letting pastures recover and farrowing are necessary because there is nothing actually removing manure, he says.

“Earthworms are an expensive, long process given how long it takes them to establish, let alone establish in pH range tolerant soils.

“You might as well use dung beetles which get rid of the dung in up to 48 hours as opposed to four-five weeks or more for an earthworm.

“The earthworms we tend to use come from the same areas most of our dung beetles originate in, so they are beneficial to each other. In studies now we are finding at least a four- to five-fold increase in earthworm biomass; and the depth they occur at is much greater following dung beetle activity because of all the resources in the ground now available for the earthworms.”