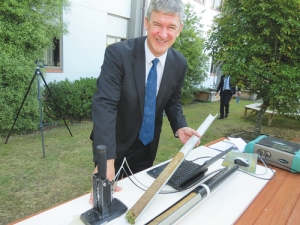 A report on the state of New Zealand soils has expressed great concern about the disproportionate amount of high-quality land being used for urban development.

Prepared for MPI by Landcare Research, the report says high quality versatile soils make up just 5.5% of NZ's total land area and as they come under pressure hard choices have to be made on optimum and sustained use.

It also says there is a lack of understanding of the interconnection between people, soils, plants and animals; consequently society is poorly informed about the importance of soil and wise soil management. The report says soil management needs have not been nationally prioritised and in coming years it will be crucial to avoid making decisions on land use that will have long-lasting or irreversible impacts.

According to Landcare's chief executive, Richard Gordon, part of the problem is that 15 years ago people claimed they knew everything about soil that was needed to be known and stopped investing money in soil science. That has now been shown to be wrong and far from the truth. He believes with the intensification of agriculture – in particular using irrigation on stony soils – this means leaching can be a problem.

"For example, work on lucerne – a deep rooted crop – has trials being undertaken to see whether it can help to reduce nitrate leaching.

"The other issue is erosion because what we do with our streams is important and in particular what we plant around our streams. They say what happens in fresh water starts on the land, so if we are not managing erosion we will have more sediment."

Gordon says one of the problems is that a lot of the experienced soil scientists are reaching retirement age and Landcare is making a special effort to put young scientists with an older cohort so they can learn from the former's experience.

Farmers affected by Mycoplasma bovis are cautiously welcoming a report that the eradication programme is approaching a successful conclusion.