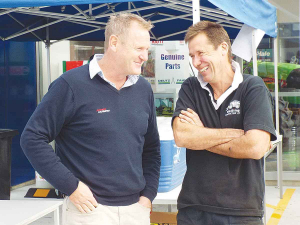 On what should have been the second and third days of the cancelled National Fieldays, a group of Morrinsville businesses used June 11-12 to launch and run their own event.

The Waikato Agri Hub Expo concept came about, like many others, over a glass or two of beer when Richard Clarke, Darrell Russell and Brent Osborne, respectively from Power Farming Morrinsville, Piako Tractors and Power and Earth, came up with an idea.

Realising that Fieldays wasn’t going to happen, they wanted to use the gap in the calendar to say thanks to their loyal local customers with a slice of hospitality that included food and drink, and also the chance to take a look at the latest technology that would have been on show at Mystery Creek.

Well supported by the brand managers from many of their suppliers, the rest of the rural machinery industry backed the idea and many of the rural supply towns’ other businesses came on board. This saw Norwood, Peter Glidden Honda, Phil’s Motorcycle Centre and NV Motorcycles opening their doors, in the case of the latter, showcasing their new premises on the western edge of town.

Richard Clarke, dealer principal of Power Farming Morrinsville, says the idea came together very quickly, with the initial plan drawn up on the back of a beer mat.

“It quickly got the backing of the local machinery businesses and is just a great way to say thanks to our local supporters, be they farmers, contractors or lifestyle property owners. Having had a couple of months of very strange times it was also intended to give rural folk a chance to catch up with friends, relax and, of course, spin a few yarns.

“It’s been really easy to do, well received by the visitors and certainly led to several enquiries for us to follow up.”

Indeed, having spent a few hours in town on day one, Dairy News can report that the relaxed atmosphere was going down well with the visitors, parking was a breeze and for those looking to hear some noise and see some dust, the tractor pull organised by Power and Earth was hitting the spot.

The concept, like most good ideas, was simple in its execution and delivery, offering something that could be repeated in many rural towns throughout New Zealand.

The idea proved to be so popular, that one out-of-town tractor dealership, which set up, uninvited, on the outskirts of town, was told to move on by the local ‘sheriff’.