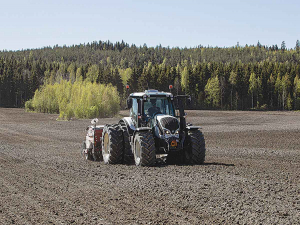 The Valtra N4 series has an updated four-cylinder, 4.9 litre engine.

With Stage V emissions regulations coming into force across Europe, Valtra has taken the opportunity to include some new features on its updated models.

Engine changes, focused on meeting stricter emissions regulations, follow AGCO Power’s philosophy of after-treatment only. A new unit, tucked away under the right corner of the cabin, creates a slim-line exhaust that can hardly be seen past the A-pillar.

The smallest Valtra tractors to receive this change are the N4 series with the updated four-cylinder, 4.9-litre engine.

The latest N134, N154 and N174 models are fitted with a single air-bag version of the Aires pneumatic front suspension. The dual airbag version has been fitted to six-cylinder T-series models for a few generations.

Valtra T4 series tractors are fitted with 6.6-litre or 7.4-litre, six-cylinder engines. With the change to Stage V, Valtra has dropped the T144 from its ANZ line-up. However, the company has bolstered its range with the addition of Tier 3 (non-SCR) T154, T174E, T194 and T234 models with Powershift transmissions.

Other new features, common to both series, include the front linkage position display through the SmartTouch terminal, and new tyre choice options that now include Bridgestone and Continental, plus some new options from Mitas, Michelin and Trelleborg.

Lower-spec Hitech and Active variants can now be optioned with an auxiliary SmartTouch ISOBUS terminal and the AGCO Common Electronic Architecture (CEA) Valtra Guide system, which is used in the Versu and Direct models.

The S4 range, Valtra’s highest horsepower offering, has also undergone some changes with the move to Stage V engines. S4 tractors come in black, and they combine the 8.4 litre AGCO Power engine with the AGCO CVT transmission and the SmartTouch user interface.

Like its smaller siblings, the after-treatment system is located under the right side of the cab at the expense of the fuel tank, countered by an increase in capacity of the left side fuel tank. This redesign includes new stairs and handrail, a more accessible toolbox, and a new battery box.

Valtra will continue to offer the S4 with the option of a non-SCR Tier 2 engine. It uses an older version of the turbocharging system and does not produce the additional 30 hp of boost of the Stage V engine versions.

When Chris Kenel bought his first Valtra tractor back in 2003, he told the dealer he thought it would last 20,000 hours and he expected the only thing that would wear out would be the seat.