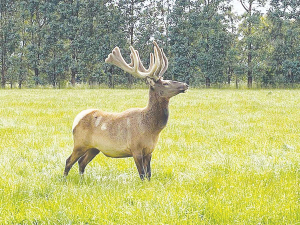 May's Wapiti stag Eureka has lived up to his name, yielding 16kg of velvet as a three-year-old - simultaneously setting a Mayfield, New Zealand and, what May understands to be, a world record as well.

Eureka was born and bred at Mayfield Elk. May says the stag will be joining the farm's AI programme, with semen available both nationally and internationally next season.

"We already have semen straws available from his sire Savannah," he says.

Meanwhile, another Mayfield bred bull Savannah, with Korean Gold heritage in his bloodlines, is now seven-years-old.

"His hard-antler spread this year reached 54 inches - an inch on the Duke's (another Mayfield bull) 53 inches at the same age."

It appears that Southland, as a region, is conducive to producing high quality Wapiti genetics and velvet.

Amanda Nally, who has worked with May for 15 years, believes Mayfield Elk Farm, along with fellow local Wapiti stud breeder Dave Lawrence from Te Kana Stud, are part of the reason why the Southland does so well in an Elk Wapiti sense.

"It has a lot to do with the friendly rivalry between Tom and Dave," she told Rural News. "Both are excellent farmers whose strive to outdo each other and this has resulted in huge improvements in the NZ Elk Wapiti bloodlines."

May's 100ha property at Thomson's Crossing was one of the first New Zealand sheep farms to be converted to suit the giant deer - he also has a 37ha block at Earnscleugh, Central Otago.

A fourth-generation farmer, Tom May began his career farming sheep and fattening lambs on his 100ha property at Thomson's Crossing in 1980.

Not long afterwards, he brought his first Wapiti straight off the chopper from a live deer recovery operator and says he became "hooked" on the big beasts.

Within five years the fences on his Southland farm had doubled in height and the sheep had gone, replaced by majestic Wapiti captured from the wilds of Fiordland National Park.

"I am a great believer that big is beautiful," May says.

The General was a cornerstone of the Mayfield Elk bloodlines. Bred at Mayfield, then sold in utero before being brought back as spiker. May says the stag was a magnificent animal containing the best of the bloodlines of the free Fiordland Wapiti of a by-gone age. The 12.7kg he cut as a nine-year-old - although long since eclipsed - was impressive in its day.

However, May says the animal's heavy beam and body have been passed down through the years.

May was quick to see the advantage of artificial insemination techniques for deer - developed by Dr Mike Brigand from his Central Southland Veterinary practice in the early 1990s.

"Biotechnology advances made it easy for Mayfield Elk to add pedigree Canadian Elk bloodlines to our wild Wapiti strain," he explains. "And, in turn, export the semen of our top bulls back to the USA and Canada."

May is a founding member of the Elk Wapiti Society of New Zealand, formed in 1984 to help both promote the breed and learn more about it, and was president in 2003.

Gisborne farmers deering to be different

During the past 20 years Malcolm and Caroline Rau have quietly built-up the Gisborne region's largest deer herd.

New Zealand and South Korean scientists say they will soon be able to identify the compounds that give deer antler velvet its immunity-boosting properties.

Deer farmers have now enjoyed a six year-run of firming prices for velvet antler, making velvet production one of the most profitable livestock farming ventures.

With dry conditions and a disappointing venison schedule, it has been a tough start to the year for many non-velvet deer farmers.