Gisborne farmers deering to be different 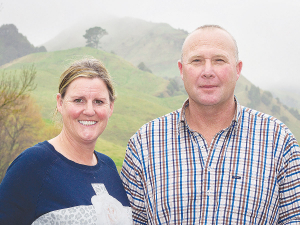 Malcolm and Caroline Rau have spent 20 years building up the largest deer herd in the Gisborne region.

During the past 20 years Malcolm and Caroline Rau have quietly built-up the Gisborne region's largest deer herd.

It has given their operation another layer of resilience in a very changeable market, as well as other benefits associated with diversification.

The Raus' farm, Piketia Station, is nestled in the misty foothills of Te Urerewa. It has an even split of sheep, beef and deer - a deliberate strategy aimed at providing resilience to market fluctuations.

Like many farmers, they were passed the baton by the previous generation - initially leasing Puketia from Malcolm's parents in 1999, before buying it from them in 2006. A year later they expanded, leasing the neighbouring 400ha Manakotahi Station to make a total of 1000ha effective.

Their work over the past two decades was recognised last year when they were named Federated Farmers' Wairoa-Gisborne-East Coast Farmer of the Year. Their three-year average surplus per ha of $695 certainly played a part in that.

Sheep and beef are the cornerstone of many Kiwi farms, but Malcolm Rau says having deer in the mix has more than one advantage.

"There are definitely benefits to have that third stock species in the mix - pasture-wise and also parasite-wise - it actually benefits all the stock," he adds.

"One class or one species will consume the worms or larvae from the other one, but it won't affect them - they're not compatible. So, they're taking out each other's worm burden as they go, with a little bit of stock management; you put the right class of stock, at the right time, in front of the next class of stock."

Rau also reckons that having different classes helps manage the weeds, so they don't need to spray anything.

Despite a few"stitches, broken bones and hospital visits" from ill-tempered stags in his early days, Rau loves working with deer.

"I grew up on a deer farm and always worked on deer farms, so it was a natural fit," he says. "At the time, when I really started building up in deer in the early 2000s, the industry was extremely low. I started out with a small herd of about 120 hinds. We have a few thousand deer now, so we've come a long way."

Genetics and feed are important factors in any deer operation, but Rau puts another one above them all - temperament.

"It's me and them, all the time - so temperament is number one and goes ahead of production."

The biggest challenge, day to day, is still price fluctuations.

Since the Covid-19 pandemic began, venison prices have dropped around 50%, with premium New Zealand venison less in demand from overseas restaurants, many of which cannot open. Velvet sales remain steady, adding another income stream to the operation.

"Velvet dropped a small amount, but nothing too much," Rau adds. "Maybe 10%. It normally fluctuates that much year-to-year anyway."

"Venison prices remain subdued for now, and while velvet has managed to largely maintain its value through the pandemic, freight issues have been challenging for both venison and velvet exporters," she says.

"European markets remain relatively slow to recover, but they should improve with lifting vaccination rates as they year progresses. This, in turn, should increase demand for venison in Europe towards the end of this year - when venison consumption tends to peak."

Industry bodies like DeerNZ are also continuing to focus on improving the reputation and demand for New Zealand velvet and venison globally.

Inevitable price fluctuations give rise to a need for lending, and Rau says his bank has stepped up whenever needed.

"The first 18 years weren't much fun financially, but the last five years have been a bit more enjoyable because the pressure's not as high as it was," he explains.

Rau says their banker - who's been with them for 14 years - knows the business really well - he was part of the excitement of the 'Farmer of the Year'.

"But he's also been there for the tougher times too."

Rau believes the secret to their success all comes down to persistence. "We felt like we were treading water for years and years, and it's just starting to work out now."