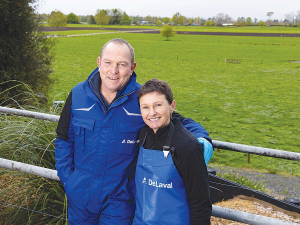 The couple farm a 300 cow milking herd on Dennley Farms near Tīrau, and last year won the national supreme title in the Ballance Farm Environment Awards.

They say it’s important that they view themselves as food producers rather than just farmers, as hygiene and health and safety standards become increasingly important to the long-term protection of dairy export markets.

“We put in a new milk filter sleeve after every single milking,” says Adrian.

“We had a visit from a Korean food safety authority and that was the main thing they were interested in. We also do a hot wash after every milking. We think that we have to treat our milking area like a commercial kitchen, not a farm shed.”

As part of a farm overhaul that has seen them take out several farming excellence and environmental awards, the Balls put in place a DeLaval All-Inclusive performance plan for the supply of their aftermarket consumables, including detergents, liners, and filters.

They say having an agreement in place to anticipate on-farm requirements means they can welcome unexpected customer or food authority visits without hesitation.

“We’re able to bring a customer or an authority in here for an inspection, unannounced, any day of the week and we’re ready,” says Adrfian.

“If we all see ourselves as food producers, that’s the way we will give the market credibility to pay us more.”

It’s change in approach for the couple, who had previously just purchased whatever detergents or other aftermarket consumables were on special.

“There are a lot of guys out there running really lean, but the last thing you want is a grade and you end up with less in your pocket. It takes a lot of time to find a problem behind a grade, it’s better to just have it sorted in the first place,” says Pauline Ball.

DeLaval says although farmers are increasingly aware that strict health and safety and hygiene standards have wide benefits, many still don’t put it at the top of the priority list.

“We’re looking to take the risk off the property for them,” DeLaval says.

“Farmers face multiple layers of regulation and legislation, so we’re trying to bundle up an answer for them so they’re compliant, and protecting the eventual consumer, without it being a burden.”