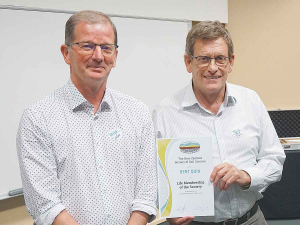 This is despite farmer difficulties with the extended drought and getting their stock processed, not to mention complications arising from COVID-19.

He claims this a clear sign that more and more farmers are seeing through the “disinformation campaign” about Quinfert’s Algerian RPR, touted as an environmentally protective fertiliser<.

“It has longed been ranked one of the very best RPR’s internationally, in all the internationally used tests, and even more importantly, in field trials”, Quin says.

“Putting the hard facts forward in regular print advertising has had a large role to play in this”.

Quin believes farmers are becoming increasingly cynical about what they are being told by their regular supplier.

“They have been told for decades that soluble P doesn’t get lost in significant amounts to the environment in runoff or leaching. Now, with Quinfert appearing on the scene with its true RPR, farmers are being offered a drilling super type product as the saviour for the environment because it has far lower P losses than superphosphate,” he adds.

“Farmers were also told that high-performance RPR had become very hard to get.”

But Quin says that Algerian RPR had been available all the time and was offered to the industry.