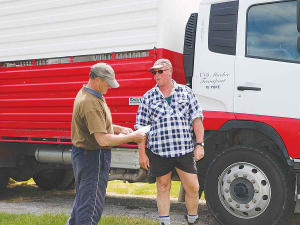 It will be illegal to transport untagged animals from next week.

Transporters are backing the law, introduced to reduce the number of untagged animals being moved without any accountability.

It also aims to drive incentives for the tagging and registering of animals.

There are some exceptions. Animals that have an unsafe to tag (UTT) exemption and a transport operator carrying a paper or eASD declaration from the farmer that the animals being moved are tagged and registered in NAIT.

OSPRI is advising farmers to check that all animals are tagged and registered in NAIT and declare any unsafe to tag animals in NAIT and ensure the animals are clearly marked.

It also wants farmers to fill in the declaration (paper or eASD) ready for the transporter to collect.

OSPRI says transporters are united on the new legislation following extensive consultation throughout the country with members and farmers: “The universal advice is not to transport animals unless they receive a completed paper ASD or eASD declaration from the farmer.”

Road Transport Forum New Zealand chief executive Nick Leggett says the new law puts in place a regime that provides assurance that all animals are tagged and registered in the NAIT system prior to transportation.

“Both the farmer and transporter have very clear boundaries now and must share joint responsibility with the PICA (person in charge of animals) expected to complete a new livestock transporter declaration to their transporter,” says Leggett.

“It provides more clarity for roles and responsibilities around transporting animals and ensures that animals are tagged or visibly marked, if they are unsafe to tag. It also supports the integrity of the NAIT system and is fundamental to building animal traceability.

“The new legislation is what the wider industry supply chain and markets asked for and, once it’s universally adopted, it will strengthen our national biosecurity capability through accurate traceability, which will have mutual benefits.”

Leggett says the new legislation around transporting animals will have mutual benefits for farmers and transporters and build our national biosecurity capability.

Transporters are united and ready to play their role.

“Our advice is they should not move animals unless they have a completed a paper or eASD declaration from the farmer. It’s about stepping up and doing what is required,” says Leggett.

The Road Transport Forum carried out extensive consultation nationwide with livestock transporters and presented it to the select committee.

“We have worked collaboratively with officials and farmer representatives to develop the amended ASD form and continue to work with stakeholders developing educative collateral.

“We also sought a one-month trial before the early June implementation to test systems so that the NAIT system will be ready and functional.”

The Road Transport Forum does not support scanner technology fitted to freighters.

Nick Leggett says transporters support changes and improvements to the transportation of animals. But he points out that “you can’t design a law around technology which is not currently available”.

“First, there needs to be negotiation on whether there is enough demand and, on the required infrastructure and investment.

“We are merely a link in the chain, the PICAs after all pass on movement information rather than transporters who are essentially unrelated to the process. For now, the ultimate responsibility still rests with PICAs to scan animal.”