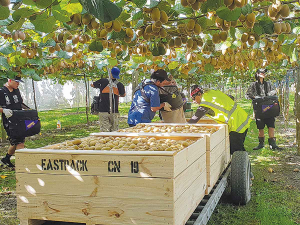 Export revenue for apples and kiwifruit is up by 18% on last year.

It notes that Covid has highlighted a number of dependencies and risks across the sector, which – to some degree – have been highlighted in the past few months.

For example, it says there have been supply chain issues and, by and large, the sector has been nimble enough to deal with these well. The report also flags the issue of sending goods by air, when passenger flights are fewer in number.

However, it points out that only about 5% of NZ’s primary exports are airfreighted, and these tend to be high-value ones, such as seafood, lamb, some horticultural crops and infant formula.

The report has some good news and highlights that in the past year, to the end of June, revenue from primary exports will be up by $1.7 billion on the previous year. This has been helped significantly by dairy exports, which were up $512 million from the start of March.

However, to some degree, it counters this news by outlining that – for the most part – this increase is due to the falling NZ dollar. It adds that if our dollar hadn’t fallen, primary export revenue would have actually been down.

The warning for NZ, says MPI, is changes in consumer behaviours with an emphasis on people cooking at home more – especially in China. It says this means consumers will look for foods that are easier to cook and these food items may outperform some high-value items that dominated the food service sector.

Meanwhile, the authors of the report claim that consumers will be looking for quality, healthy food – which is an area of strength for NZ.

MPI says that so far Covid has had little impact on NZ’s kiwifruit and apple exports, with global demand for strong fresh fruit. The report points out that the position for NZ’s horticultural exports is different to the rest of the industry, with most of our export fruit sold at retail level and only limited quantities going into the badly hit food service sector.

It says the kiwifruit harvest for current season was up by 6%, due to new plantings and favourable weather. Meanwhile, the apple and pear harvest will be up by 5%. Export revenue for apples and kiwifruit is up by 18% on last year.

However, when it comes to meat, fibre and dairy the news is not so good.MPI says that global meat prices have an uncertain outlook with a number of contradictory signals.

The prospects for wool are also not good and the report notes that export revenue from February to April this year is down by 37%. MPI says wool prices are likely to remain ‘subdued’ for at least the next year.

Dairy is also expected to take a hit in the coming year. This is reflected in current predictions for the farmgate milk price, with the current range sitting between $5.60 and $6.50kg/MS. The report says this will be close to – and in some cases below – break-even levels of profitability for some farmers and has the potential to undermine the financial viability of some marginal and highly indebted farm businesses.

Forestry has also taken some big knocks financially in the last few months and the report says its future depends, mainly, on how China will weather the looming global recession.

With the exception of horticulture, the report is full of words such as uncertainty, challenge and warnings.

It also warns that in the coming years, NZ will have to contend with the rise in protectionist policies in places such as the EU and the USA.

It says the battle for free trade will be a big fight for NZ.

On the home front, the report says the impact of the drought, especially in Hawkes Bay, as well as feed shortages in Southland and – as always – the unpredictable weather will add to the pressure currently on rural NZ.

Funding boost to empower women to farm for the future

John Roche, chief science advisor at the Ministry for Primary Industries (MPI), reckons despite all the local and international challenges facing the New Zealand farming sector, it has a lot of positives going for it.