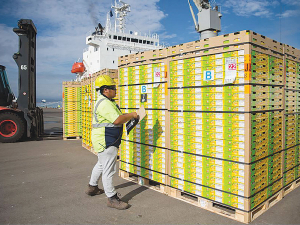 Prospects for the NZ kiwifruit sector remain strong due to expanding kiwifruit consumption in Asia, the EU and the US.

According to the Rabobank report, No red light for green and yellow kiwifruit, global kiwifruit production reached four million metric tons in 2021 - a three year high, but still below the record figures of 2018.

However, Magana explains that if China is removed from these production figures, since almost all of its supply goes into the domestic market, then there are five main producing countries - New Zealand, Italy, Greece, Iran and Chile.

"New Zealand is leading in production due to increased acreage, and (excluding China) now represents 33% of total global production, up from 24% in 2012."

Off the back of this production increase, Magana says New Zealand solidified its position as the world's largest exporter of kiwifruit in 2021.

"New Zealand kiwifruit exports reached a record figure of 647,700 metric last year, 13% more than 2020. Exports out of Italy were down in 2021, while volumes from Iran, Greece and Chile remained stable," he explains.

"About 88% of New Zealand kiwifruit exports went to Europe and Asia in 2021, with Asia predominantly importing the golden kiwifruit (60%) while Europe primarily imports the green variety (50%)."

"We expect to see this trend continue in the medium-term, given planted area of Hayward is declining, while increasing for yellow varieties," Magana says.

"A further opportunity for the New Zealand industry, is the launch of Zespri's new Ruby Red variety, which is set to enter the market in the 2022 season," he adds. "We're confident this variety will find a niche in the Asian market due to its red pulp and berry taste."

With consumption of kiwifruit expanding in Europe and Asia as well as the US, Magana believes the prospects for New Zealand's kiwifruit sector remain strong. However, he warns that production challenges are expected for growers in New Zealand and in other key kiwifruit production regions.

"Growers and exporters are likely to face significantly higher costs, including but not limited to fertiliser, energy, harvest packaging and freight."

Zespri says it has had a record season, with its global fruit sales revenue exceeding $4 billion for the first time.