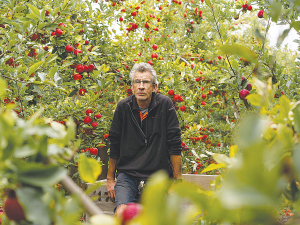 Hawke's Bay apple grower Bruce Mitchell says this year's labour shortages have meant that 40% of his gala crop could not be picked.

Sector representatives have called on the Government and Immigration Minister Kris Faafoi to create a plan that will allow more Pacific Island workers into the country in the year ahead. The industry wants to avoid the devastating impact that is happening to the current season’s crops as the labour shortage hits crisis point with fruit harvesting at its peak.

Small orchardist and exporter Bruce Mitchell – whose family has been orcharding for over five decades – left six blocks of Royal Gala apples on the trees this season as he couldn’t get anyone to harvest them.

“It’s so devastating to see the best gala apples I’ve grown just rot on the ground because we didn’t have anyone to pick them,” he explained. “I was desperate and did everything I could to find people to harvest the apples. On the day we started, I was expecting 20 pickers, but only two people turned up so we physically couldn’t pick 40% of the gala crop.”

Mitchell is among hundreds of small to large orchardists and exporters who have either left export quality fruit on the trees or have compromised quality as the fruit hasn’t been picked at the optimal time.

New Zealand Apples and Pears chief executive Alan Pollard says he’s aware of leases not being renewed, blocks being pulled out and not being replaced and new tree orders being cancelled.

“Now that the harvest is at its peak, these labour shortages are a reality and we are seeing devastating consequences for many growers and exporters, including a serious impact on mental health and resilience,” Pollard said. “We cannot have a repeat of what has occurred this season. We estimate that we need at least 21 weeks from a government decision to the time that the workers need to be deployed – so there is real urgency to find a workable alternative solution."

The group is calling on the Government to announce a plan for the return of RSE workers from Covid-free Pacific Island countries and work with the sector to allow more Pacific Island workers into New Zealand.

“We urgently need a plan for 2022 to avoid the carnage we have seen this season.”

Labour issues will be the key focus for Summerfruit NZ's new chief executive Kate Hellstrom during the coming 12 months.

Brilliance of the humble bumble

The life of a bumble bee may be relatively short in comparison to a honey bee, but its contribution to…

When Owen Schafli and his family - wife Linda and son Colin - decided to grow pineapples in Parua Bay,…