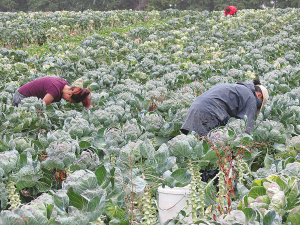 With our borders opening up, Hort NZ would like to see more backpackers coming into NZ to help with harvest.

Hort NZ chair Barry O'Neil notes that while the Government has supported a slight increase in migrant workers, from 14,400 to 16,000, he says this needs to be lifted to well above 20,000.

O'Neil says the RSE scheme is a good programme for both NZ and the Pacifica and rejects claims about poor wages paid to RSE workers.

"The payments for RSE workers are very good. I don't accept any notion that we as a sector are dependent on low cost migrant labour," he told Hort News. "It's not low cost, it's higher cost than a number of sectors are paying in NZ."

But the labour shortages that have dogged the industry during the pandemic continue to throw up new problems. O'Neil says this has meant that growers are, in some cases, competing with each other for staff and that is putting up the price of labour.

"Some sectors can afford to pay more and they are doing so because they need the labour," he explains.

"Other sectors can't afford to do that. So, there is a dynamic playing out there that I don;t think is healthy or favourable to the sector, longer term.

"We are trying to get automation in as fast as we can and it's already well advanced into the post-harvest side, but it's much harder to introduce it at the orchard level," he says.

One option to make picking easier in orchards, O'Neil believes, is to use platforms, which removes the need for people to climb up and down ladders all day. These tend to suit less agile people who are very good pickers.

O'Neil adds that with the borders opening up, he'd like to see more backpackers coming into NZ. In the past, they have been a major labour source for the horticulture sector.

Shipping is another issue that continues to haunt the hort sector. O'Neil says for the kiwifruit industry, which is vertically integrated from orchard to consumer and with their own supply chain, it is much easier. He says this sector has the critical mass to lease its own refrigerated ships and has much greater control over shipping schedules.

"But shipping caused all sorts of tensions and challenges in the apple industry," he says. "Its cool storage situation became very acute because cool stores were full and ships that would normally be taking containers out on a daily basis wasn't happening. So, various sectors got challenged in different ways."

O'Neil says growers in the South Island tended to have more problems with shipping than those nearer the larger ports in the North Island, but there were different challenges for everyone.

"Personally, I am optimistic about the season coming up and while we're not out of the tunnel we can see some bright lights."

"Heart-breaking" is how growers are describing the waste of fruit left unpicked to rot due to lack of labour - made worse by Covid.