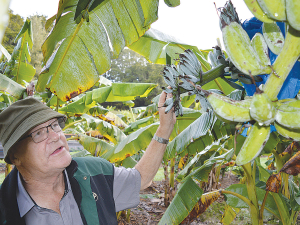 Hugh Rose grows more than 30 varieties of bananas on his Northland farm.

On his 23ha farm at Maungatapere, about 30km west of Whangarei, Rose has 2ha with over 1,000 banana plants of 30 varieties from around the world.

A plantation (Tallyman's Bananas) owner, consultant and stem seller, he is also the president of Tropical Fruit Growers of New Zealand, an organisation representing the interest of 150 growers producing small fruits including pineapples, mangoes, sugarcane and coffee beans.

The organisation has been helping potential banana farmers get off the ground by supplying free suckers and stems.

Commercial banana growing remains a fledgling industry in New Zealand, but Rose says it's easy and could be a good side income for dairy farmers and is also environment friendly.

"Dairy farmers could do well to plant a spare hectare or two in bananas because they produce 13 tonnes of dry matter per hectare - the same amount of animal food as a good rye grass and clover pasture," he told Hort News.

"Cows love all parts of the banana, and because the plants are heavy nutrient feeders they're good at catching nitrates and phosphates before it leaches into streams."

Rose says he loves promoting the banana industry and helping other farmers start their own plantations.

"I haven't made a lot of money growing bananas, but I have had a lot of fun making it happen," he says.

"But we have established an industry and it is here to stay."

Rose says good banana plantations can be found between Matakana and the Far North and those farms could be 50-60ha in total.

"This is a very small amount compared to what NZ consumes and almost all fruit is sold locally," he explains.

"We have four to six regular sellers of bananas at the Whangarei farmers' market who are sold out most Saturdays before 8am."

Kiwis love the yellow fruit, chomping through 18kg per capita a year - about $140 million worth that puts NZ at top of the global list for banana consumption.

Rose sells most of his bananas either directly to cafes and restaurants or at the farmgate.

He also has a steady stream of vegan New Zealanders as well as those of Pacific and Asian origin inquiring about fruit, flowers, leaves and stems.

Most commercial NZ bananas are sold through local markets and specialty fruit stores and not enough volume is being produced to involve wholesalers and supermarkets.

Rose believes the economics of banana growing compare very favourably with most other land uses.

At 1,500 stems a hectare, two bunches of fruit a stem each year, at least 10 hands a bunch and $5 retail a hand in local growers' markets, the returns are attractive.

When combined with using dairy effluent for watering, their anti-leaching properties for nitrogen and phosphorus and as fall-back supplementary feed for cattle, the humble banana goes a long way.

Hugh Rose caught the banana bug in 2015, while he was living in Parua Bay, about 30km east of Whangarei.

One morning he saw another farmer, Owen Schafli, taking bananas to a customer and became interested.

"Like many people in Northland, we had grown bananas with moderate success for a long time, producing fruit that were tasty bus small," he explains.

"In 2015, we met Owen Schafli, a tropical plant guru. Owen hails from South Africa, and no-one told him that he couldn't grow bananas in New Zealand, so he set about doing what he does best.

"Inspired and educated by Owen, we caught the 'banana bug' ourselves and started our first plantation."

Rose's plantation has both the normal and dwarf varieties of the popular Cavendish variety, Lady finger and Pacific Island varieties like Misi Luki, Goldfinger and Hua Moa, among others.

Dealing with climate change and population growth have been singled out as two key factors that will determine land use in New Zealand.