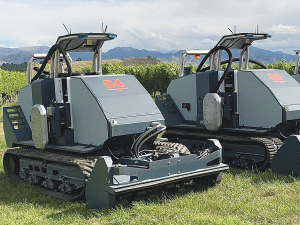 The autonomous tractor will be able to perform several orchard tasks, including canopy spraying, mulching, mowing, trimming and leaf defoliation.

The Government is contributing more than $600,000 through its Ministry for Primary Industries’ (MPI) Sustainable Food and Fibre Futures fund to help develop a prototype tractor. It is aimed at increasing the productivity of trellised orchards, while also reducing carbon emissions.

Blenheim-based Smart Machine Company is taking the lead on the three-year project and it’s contributing a further $945,000.

“As well as lowering carbon emissions, we could expect to see reduced spray drift, and improved soil and tree health. By improving orchard productivity sustainably, we could increase the value of crops like apples by meeting the growing demand for products made with less impact on the environment.”

“While we want to go fully electric eventually, we need to be sure it will be suitable for remote rural areas,” he explains. “Some orchard tractors run 20 hours a day, seven days a week, so if growers have a fleet that needs frequent recharging that might not be practical.”

With this in mind, Smart Machine is working on a diesel hydraulic system with some electric components, with the view to converting to full electric further down the track.

Smart Machine researchers will adapt the lessons and technology from the successful testing of a tractor, they initially developed for vineyards with the Pernod Ricard Group in Marlborough. Those autonomous units, dubbed Oxins, featured a twin track system, weighed in at around 4,500kg and featured a 100hp Cummins powerplant.

The company notes that the transition to developing an autonomous tractor for orchards isn’t a huge technological leap. Pip-fruit growing environments with the latest 2D canopies are similar to the way grapes are grown.

Penno says this project aligns with the Government’s Fit for a Better World roadmap.

“Developing this low emissions alternative for orchards will help in our goal of shifting to a zero-carbon society, boost sustainability and also has the potential to increase export earnings.”

The project, based in Blenheim, plans to expand testing to Motueka and Hawke’s Bay next year.