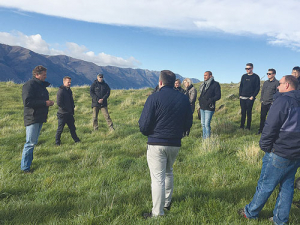 Jonathan Wallis of Minaret Station (left) shows an international group of chefs and food writers around his Alliance-supplying farm near Queenstown.

Alliance Group recently hosted overseas chefs and writers in an effort to differentiate its products and position itself as a sophisticated “purveyor of premium fare.”

Michael Wignall, Renee Miller and Simon Hulstone of the UK, and Jim Lofdahl and Silvio Armanni of Hong Kong, were among the chefs. The food writers included Dubai-based New Zealander Zowie Bowker, whose blog has 46,000 Instagram followers, and Wilson Fok of Hong Kong’s Tatler Dining.

“We’re aiming to improve the awareness and understanding of NZ as a purveyor of premium fare.

“Although the country has a fine reputation, we can do more to highlight the source, environment and people behind our premium lamb, beef and venison.”

Russell says Alliance aims to capture greater market value for the benefit of its farmer shareholders, “taking our premium fare to the world and building a cadre of international chefs who have experienced the land, people and environment”.

Alliance says its products are enjoyed in at least 65 countries.

Making it OK to ask for help

Meat processing company Alliance has started an employee support programme aimed at getting colleagues to look after each other and keep an eye out for possible mental health issues.